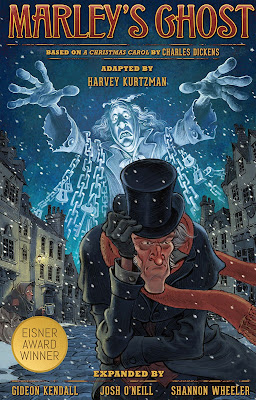 This is a fantastic and faithful graphic novel adaptation of Charle's Dickens' A Christmas Carol using much of the story's original dialogue, with only the lightest (and very helpful) bit of modernization.

The revisions are limited, with the biggest probably being a change of the Ghost of Christmas Past from an old, child-like, man, to now being a waif-like girl. Not sure why the change was made, but it doesn't impact the story. Then there is also the general abridgment, with the comic coming in at probably half the text of the original story.

The original has some problematic spiritual content – ghosts of various sorts, including those of Christmas Past, Present, and Future – and this adaptation shares the same. So if you disliked the original for that reason, you won't like this one either.

But I'd argue that is a mistake, as this story isn't meant to teach anything about ghosts or the afterlife. Dickens lesson is entirely about the here and now – he wants us to understand that money brings cold comfort – Scrooge treats gold as his god, and this deity only brings him misery. What's actually problematic is the alternative "god" Dickens proposes. While the God of the Bible is made mention of (less in the comic than in the original) He is not the source of happiness in this story. The god here – in both original and adaptation – is generosity. If you are generous, then you will be happy and your life will have meaning.

Oh, Dickens, so near and yet so far!

Still, with that shortcoming understood, this classic can be appreciated – Christmas is made much of, and if we remember what this day commemorates then we can see Scrooge's transformation as a small reflection of the generosity and humility Christ showed in coming down to earth.

This book has a loose connection to Harvey Kurtzman, a cartoonist most famous for his work with Playboy and Mad magazines. However, the comic is not written or drawn by him but is only based in part on a treatment he produced, so this connection is really rather irrelevant. I only mention it to note that as good as this book is, his other work isn't.

Other cautions would be limited to the unnecessary additions of two words – "bugger" and "bloody" – to Dickens' original text. Would that this bit of "modernization" had been forgone!

If this loyal and inventive rendition was available in print, I would have already ordered a copy, but, alas, you can only get it in a digital edition. That said, if you have a large tablet, this will be a treat, and you can get it at Amazon.com here.
Posted by Jon Dykstra at 2:45 PM