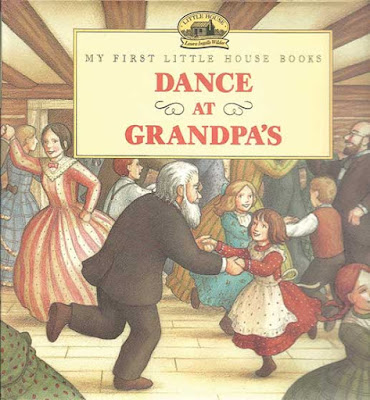 
I'd expect most everyone has heard of Laura Ingalls Wilder's Little House on the Prairie series. Not only are the book loved by children and parents alike, they spawned a 1970-80s TV series that was wildly popular too.

If by chance you aren't already familiar, the series is based on the author's own experiences in the late 1800's as a small child living the pioneering life.

This picture book, Dance at Grandpa's, is an adaptation of Chapter 8 from the first novel, Little House in the Big Woods. While neighbors are far flung, they do come together for special events, and this time everyone is invited to Grandma and Grandpa's big cabin. Laura, her Pa, Ma, big sister Mary, and baby sister Carrie, get bundled up in gloves, boots and coats, then covered up with blankets on the sleigh, as they head on their way to Grandpa's. Everyone brings their children so as the big cabin fills, Laura finds that there are "every so many babies lying in rows on Grandma's feather bed." Her pa then takes out his fiddle and the dozens of couples begin to dance and swirl. Laura discovers there's also food of all sorts, including wonderfully sour pickles! When the dancing finally stops Laura heads to bed, and come morning her family heads back home on their sleigh.

As with any adaptation the obvious question is, why not just read the original? Our family has previously enjoyed the original novels as audiobooks – from youngest to oldest, everyone liked the novels, and probably more than these picture book versions. So, again, why read the picture book adaptations?

There are a couple of reasons. First, my youngest can't read yet, but after going through the picture book once together, she could then "read" through it on her own, which she quite enjoyed.

Second, our middle daughter is learning to read and needs books that are easy, but still have an interesting story. Many of the books at her level are so boring she finds they just aren't worth all the effort it takes to read them. But the books in this series are fun and familiar, and she has enjoyed working through a number of them.

There are 14 picture books in all in this "My first Little House books" series, all of them based on the first three novels in the original series. The first two novels, Little House in the Big Woods and Little House on the Prairie, are about Laura's childhood, and the third, Farmer Boy, is about her husband's childhood.

One little annoyance we found was that the books were not published in chronological order and aren't numbered, so it was hard to figure out which to read first. For the most part it doesn't really matter, with the exception of the three based on chapters from Little House on the Prairie where one does lead into the next. So you can read most of them in whatever order you'd like, but, if you do want to tackle them in the proper chronological order, this is what it would be:


Based on Little House in the Big Woods

The one caution I'll pass along concerns not Dance at Grandpa's, but another in the series. A Little House Birthday is based on Chapter 5 of Little House in the Big Woods and, just as in the original, the story here is all about how bored Laura is with Sunday. Her parents are very strict:


"On Sundays they could not run or shout or be noisy. They must sit quietly and listen while Ma read stories to them They might look at pictures, and they might hold their rag dolls nicely and talk to them. But there was nothing else they could do. One Sunday Laura could not bear it any longer and she began to play with Jack and run and shout. Pa told her to sit in her chair and be quiet, and Laura began to cry. So Pa took her on his knee and cuddled her and told her a story."

Eventually she falls asleep and, waking up the next morning, she realizes with relief, "It was Monday, and Sunday would not come again for a whole week."

So she's got quite the attitude about Sunday, and her parents really aren't helping things. Now, a story like this is no big deal when dad or mom are reading it – then we can explain that Sunday isn't a day of "don'ts" but a day of "get tos" – we get to have time off from our daily work and get to spend it together as God's people praising, and learning about, Him. Laura's parents made Sunday the worst day of the week and we can share with our kids that this is simply not the way the Lord's Day should be celebrated.

To this point we've read 11 of the 14 available and enjoyed them all (though we did have to have a talk about A Little House Birthday). I'd recommend them as fantastic books for Grades 1 and maybe 2. With girls as the primary characters, boys might not like most of them, but perhaps they'd be interested in the three based on Farmer Boy (I hope so, but I haven't tested these out on any boys). However, if your girls are anything like ours, they'll enjoy them all.
Posted by Jon Dykstra at 1:00 AM