I Will Maintain: Volume 1 of the William & Mary Trilogy 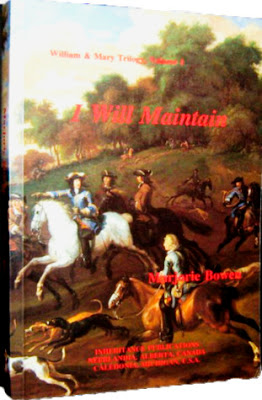 This is not a new book, but it is a new topic for me, and it's a really good look at a particularly turbulent time in Dutch history.

One of the Williams in the House of Orange is (justly) famous in Dutch history for rescuing the Netherlands from the tyranny of Spain, but this novel depicts the rise of William III, who ultimately became more famous in English history as the one who liberated that country from the domination of the Catholic King James II. In this first volume of the William and Mary Trilogy, Marjorie Bowen takes to the very beginning of William's reign, when the Stadtholders (kings) of the Netherlands have been swept out of power by the enthusiasm for republican rule, and the country is ruled by John de Witt, the Grand Pensionary (the Dutch equivalent of a Prime Minister).

What makes the novel so compelling, in spite of what some reviewers on goodreads.com feel is overdescription, is the fact that for much of the novel, Prince William is seen through others' eyes. John de Witt has taken charge of William's education, seeking to compensate him for his family's fall from grace, as well as to make him fit for a role in service to (rather than in charge of) the States General (the republican government).

Many people are less optimistic that Willem will be willing to take on anything less than full rule of the country. One man, in particular, Florent Van Mander (a secretary of John de Witt), who seeks nothing but his own advantage, at first schemes with the French to help William back into the Stadtholdership. As the story continues, Van Mander's scheming is displaced by his sincere desire to follow the Prince wherever he bids. Meanwhile, we as readers also eagerly follow William's fortunes to find out if and how he will gain power, and whether he is willing to betray his country to get it.

William is not a modest man, but it becomes very clear that in spite of his faults, he can be used by God to defend and promote the Reformed faith against the designs of the Catholic French King Louis XIV, who is willing to use any means - including intrigue, assassination, and outright conquest - to extend his power over France's neighbours. Whether William is willing and/or able to do so is tested by the invasion (over both land and sea) of the Netherlands by the French army and French and English navies. The ensuing war shows the skill and courage of many in the Dutch armed forces, including Ruard de Witt, John de Witt's brother.

Which brings us back to the De Witts, and Florent Van Mander. Bowen does not flinch away from the fact that anyone's rise to power brings others down, and as in Charles Dickens' A Tale of Two Cities, this story also shows the fearsome and chaotic power of the mob. William neither courts nor discourages the rabble who call for his restoration as Stadtholder, and so, as we may wonder when we watch Shakespeare's Julius Caesar, the questions arise as to whether you can trust anyone whom the people love quite so much, and whether you can trust the people themselves.

If you want to maintain your grasp of Dutch history, you can get Marjorie Bowen's book for free as an e-book or an online free read (also with links to print versions).
Posted by Jeff Dykstra at 4:30 AM