The Far Side Of The Moon: The story of Apollo 11's third man 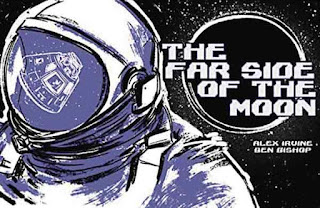 Everyone's heard of Neil Armstrong, the first man on the moon. And many of us know the name Buzz Aldrin too, the astronaut who accompanied him, and who was the second to walk on that cratered, barren, surface.

But did you know the Apollo 11 mission actually shot three men into space?

Who was the forgotten third man?

In this short graphic novel we get to experience the moon landing from the perspective of Michael Collins, the third man in the capsule – best known as one who "didn't get to walk on the moon." He travelled the same 200,000 miles through space right along with them, but someone had to stay behind in Columbia, the orbiting Command Module, while Armstrong and Aldrin headed to the surface in The Eagle, their Lunar Lander. Collins stayed behind, circling the Moon 14 times as he waited for their return.

Far Side of the Moon seems intent on conveying both how remarkable his story is – he flew to the moon! – and how melancholy – he never got to touch it. The muted pallet of black, white and spot color purple, creates just the right mood.

That muted pallet also means that even though the drawings are solid, this isn't a visual feast, and it isn't likely to grab the eye of a young reader. But if a boy, maybe 10 and up, already had any sort of interest in space-exploration, then they'd be sure to enjoy all the details about Michael Collins' training and about the different spacecrafts he flew. It might need a teacher's or parent's involvement; they might have to put it in his hands. But if they got started on it, I think most tween and even teen boys, and some girls too, would find this a really enjoyable book.