Seeing Is Believing: Why Our Culture Must Face the Victims of Abortion 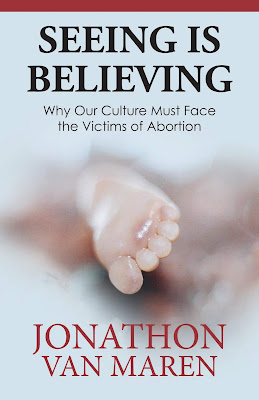 
As an English teacher, I have compiled a list of about 70 books that I consider to be really good reads for high school students. I thought that the list was finished... But Seeing Is Believing is really good enough not only to make this blog, but to join my list of all-time really good high school reads.

Why? Because Jonathon Van Maren, a front-line soldier of The Culture War (another of his books), makes a compelling case for the use of abortion victim photography – for the use of  graphic pictures.

His argument is based on not only its current effectiveness, but on the history of social reform movements that have been successful because of their proponents' willingness to bring the ugly truth of oppression and injustice before the public, even at the cost of criticism and controversy.

That long sentence pretty much summarizes the book, but let me work it out a little further. Van Maren demonstrates, in Chapter 1, how four different reform movements – targeting slavery, oppression in the Congo, child labor, and civil rights abuses in the U.S. – used visual evidence of these evils to influence not only minds, but also hearts. The next chapter describes how photographs of abortion victim effectively re-stigmatizes abortion. Chapter 3 zeroes in on how abortion particularly traumatizes those who work in the abortion industry.

Finally, the conclusion refocuses us on the real reason for using graphic visuals – the unborn child whose life is saved when his or her mother changes her mind about having an abortion.

Two appendices from other writers give the history of graphic images in pro-life work and a statistical analysis of the effectiveness of abortion victim photography.

If you think that Jonathon Van Maren can help you convince others that "our culture must face the victims of abortion," you can order it here, or here in Canada.
Posted by Jeff Dykstra at 3:30 AM