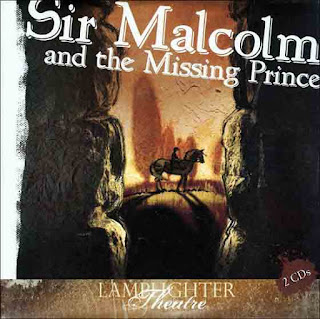 It's not the most relevant piece of dialogue in this audio production – the bulk of the story is set in pre-phone feudal times. But this bit of goofiness, popping up in the opening couple of minutes, serves as a pledge of sorts that what's coming is going to be fun. And that promise is kept!

Sir Malcolm is actually a story within a story. The "outer story" involves a harried businessman Thomas arriving at a mysterious bookstore looking for a phone. His car won't start, his cellphone is dead, and he needs to call for a tow truck. The kindly shop owner, Finnian, is happy to direct him to a duck-shaped phone, and then, as Thomas waits for his tow, Finnian helps by asking the businessman some pointed questions about just why he is so harried.

It turns out Thomas has a rebellious teen son back home. And Thomas feels too overwhelmed at work to do much about it.

That's when the story within the story begins: Finnian hands him a book called Sir Malcolm and the Missing Prince and from then on we jump into the soon-to-be missing prince's world. The young Prince Hubert has no respect for the peasant people he will one day rule, so the king turns to his most trusted advisor, the wise Sir Malcolm, to devise a plan. And quite a plan it is. Sir Malcolm is convinced that the prince could learn to sympathize with the peasants' plight if he was forced to live as one!

The king loves his son but he loves his people too, and knows that something must be done to refashion this unworthy prince. So, reluctantly, the king hands his son over to Sir Malcolm.

The fun begins when the spoiled Prince Hubert is dropped at the doorstep of a quiet, and quite poor, peasant woman named Dame Martha. There is fish out of water scenario: Hubert doesn't know a thing about living in such humble surroundings. When he won't do his share of the chores – due in equal parts to his arrogance and to his general cluelessness about what hard work really entails – Dame Martha doesn't push him or punish him. But as he sees her working hard, and as the boys his own age shame him for his laziness, the boy prince does start taking some tentative steps to becoming a servant king.

That's the gist of the story, but it doesn't capture the wonderful production values. This is Lamplighter Theatre’s very first audio production and they went all out for it, even enlisting John Rhys-Davies (Gimli from Lord of the Rings) to serve as the host. The story is based on Sidney Baldwin's 1931 children's book Young Prince Hubert, which has been wonderfully updated here.

The only caution I can think to add is that in the story that surrounds the story, Thomas is encouraged to fight for his son. This is only a couple minutes worth of content in the two hour production, but it is content aimed at parents, rather than children. And it isn't so much problematic – it won't do children any harm to hear parents encouraged to make time for their children – as it is just somewhat odd to have this bit of parental encouragement inserted into a children's tale.

We were so delighted with this audio adventure, we went looking for other Lamplighter Theater (Lamplighter.net) material at our local library. While the production values were always high, and the morals were what we'd hope for (Lamplighter Theatre does seem to be a Christian company) we haven't found another one of their stories that really grabbed our girls like this one did. I suspect that when they get older (our oldest is just 8) that might change.

But family members of any age will be able to appreciate Sir Malcolm and the Missing Prince. Two very enthusiastic thumbs up!
Posted by Jon Dykstra at 1:29 PM