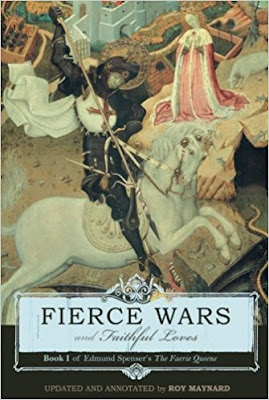 Clearly Edmund Spenser knows how to make a really good read, since both my brother and I have reviewed books based on his treatment of the legend of Saint George and the dragon.

Saint George is the first clearly Christian dragon-slayer in English literature, but his story is much more interesting and significant than the single-paragraph summary that it usually rates. George is a complex and flawed knight, much like the heroes of King Arthur's Round Table. What makes Spenser's story more significant is how George's failings, and the help he receives in his failures, parallels the spiritual struggles and blessings of Christians involved in the spiritual warfare of Ephesians 6:10-20.

Spenser's poem is full of rich allegory, of greater depth and variety than John Bunyan's simpler Pilgrim's Progress (also reviewed in this blog). As well as extolling the reign of Elizabeth I, Spenser shows how George vows to help Una (whose name shows her as a symbol of the one true faith), but is tempted by Duessa (whose name shows her duplicity and false faith). Along the way, both of them meet (among others, both good and evil) Prince Arthur (the young King Arthur), who shows the best of English virtue. When Saint George avoids being trapped in the house of Pride, but becomes the captive of Pride in the form of the giant Orgoglio, he needs the help of both Prince Arthur and the house of Holinesse. Finally, in an epic three-day battle against the dragon (wonder who that represents?), George is given supernatural aid that symbolizes the spiritual help that is available to every Christian in our struggles against the devil, the world, and our own flesh.

But why this edition in particular? Roy Maynard's often amusing footnotes and slight updating of the poem's language make clear just how full of gospel good news Spenser's story really is, and the questions at the end of each Canto (the poetic equivalent of a chapter) help us keep the story straight.

As well. this edition contains an insightful introduction, as well as occasional brief articles about such topics as Arthur, Merlin, the Crusades, dragons in the Bible, and Saint George himself. Finally, the Epilogue clarifies the importance of reading and understanding the meaning and historical context of Spenser's work.

If you want to see everything that leads up to the Fierce War with one of the great (and terrible) English dragons, you can get Roy Maynard's adaptation of Book I of the Fairie Queene at Amazon.com here and Amazon.ca here.