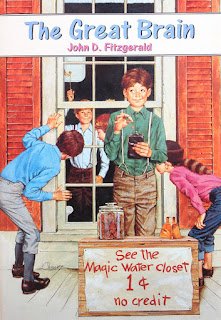 The Great Brain is the story of Tom Fitzgerald, a ten-year-old boy living in frontier Utah in a time so long ago that indoor toilets were considered a novelty. His hometown of Adenville is, like most Utah towns, populated mainly by Mormons who live beside a handful of Catholics and Protestants. For Tom that doesn’t matter since he can out think them all.

The all consuming love of Tom’s life is money. If there’s a way to get it, Tom puts his great brain to work so that the money can be his. Not surprisingly, Tom’s great brain finds other things to work on, including finding kids lost in a cave, and getting even with his teacher.

This book is fun to read as the schemes dreamed up by the “Great Brain” are often hilarious and crazy and almost always successful. Yet though Tom’s fascinating schemes are not always something to admire, there’s a wonderful sense of morality that runs through the book.

The whole tale is told by Tom’s younger brother, John. He is often taken in by Tom’s smooth justifications of his actions, but John always lets you know that he’s still left with nagging doubts. Part of John knows, however silky the Great Brain’s explanations might be, that his schemes still aren’t quite right. Tom also has great parents who are almost always on the ball. They catch onto his antics, punish him, and force him to make restitution to those he’s swindled.

In the end, though, the Great Brain sees that there’s more than money. While there isn’t an overt religious message in the book, Tom actually saves a friend’s life and passes up a great money making opportunity that went with it. It makes him feel “extra good inside. Sort of clean and warm and Christmasy.”

This is a fun book, good for anyone 9 and over. I absolutely loved it when I first read it as a kid. While it tells the story of an entertaining and sometimes shady child, it doesn’t glorify his antics. Ultimately Tom’s activities are clever, entertaining, confounding and successful, but you still are left with a clear sense that they’re wrong. It’s a fascinating tale with an “old fashioned” sense of morality; good must ultimately win out.

The best part is that not only is this a great book, but if you love it as much as I did, there’s a number of sequels to enjoy.

You can pick The Great Brain up at Amazon.com here, or Amazon.ca here.

- reviewed by James Dykstra
Posted by Jon Dykstra at 4:30 AM