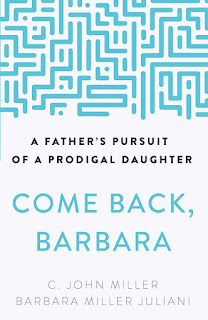 As with an earlier review, I should let you know that not all of the labels below are completely appropriate. For instance, although you can read this book in an evening or two (and you may well do so), don't stop there. Read it again, a chapter at a time, with the study questions at the end as a guide, and incorporate some of the Bible passages quoted in the questions into your own devotions.

The most important label for this book is "prodigal." It tells the true story of how Barbara, seemingly out of the blue, tells her parents that she is not going to church and doesn't want any part of the Christian life anymore. As her parents look back, they can see signs of her stubbornly self-justifying attitude much earlier, and they spend time trying to see what went wrong – more specifically, what they did wrong.

Of course, such a question is futile, and in seeking to place blame and guilt, especially on their wandering child, the Millers were, as they admit, approaching her with an attitude of shame instead of love. This story continues with her parents' journey, by God's grace, sometimes in very dramatic ways, toward recognizing that any straying child has been sinned against herself, including by her parents.

This movement toward humility, toward the acknowledgement of their own need for God's grace, leads toward other necessary changes – the willingness to seek their daughter's forgiveness, the ability to show unconditional love for an often self-centered child, the willingness to give up control over a child who is daily rejecting her parents' upbringing, and a life of persistent prayer.

That last trait is one that I want to look at more (and I will tell you about it in a review in the next couple months), but a life of prayer is certainly one of the greatest fruit of having a child wander from the truth.

What makes this story especially compelling is the fact that Barbara answers each chapter of her father's story with her perception of what her conflict with her parents looked like from her point of view. Too often, parents of prodigals can not understand what their outreach to their children looks like to them – how easy it is to for any child to see through our confident or indignant exterior to our need for control or our smug sense of superiority. At the same time, her responses also show just how great is the power of humble unconditional love.

If you want to find out more about how God brought Barbara back, you can find this book at Amazon.com here and at Amazon.ca here.
Posted by Jeff Dykstra at 12:30 AM