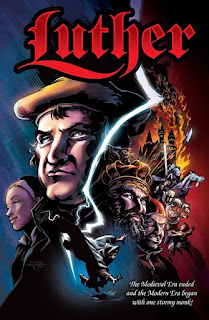 I've reviewed other "comic biographies" and never enjoyed one more. Luther is scripted like a movie, has witty dialogue with actions scene interspersed, and the artwork is of the same sort you would find in Marvel or DC comics – it is fantastic!

Educational comics, as a genre, are valuable in that they make learning history a lot less painful. But very few of these graphic novels are the sort of comic that a teen would just pick up and start reading. Luther is the exception. I don't want to over-hype it – a kid who reads nothing but superhero comics will still find this a bit of a stretch – but it really is as good a comic as you will find.

Since this is intended for teens, I'll note a few cautions about language. The word "crap" is mentioned three times, "ass" once, and "old fart" once. But when you consider this is a comic about the notoriously potty-mouthed Luther, this is really quite tame.

I'll also note that a depiction of Christ shows up on the inside back cover of the book. It is not part of the story, but rather part of an ad for other comics by the same publisher.

Teens should be told that while the general storyline follows real events quite closely, specific details are often made up. For example, while we know Katharina von Bora was a self-assured woman, it seems doubtful that she popped the question to Martin Luther. Also much of the dialogue is made-up. Some of it is made up of quotes or near quotes from what Luther did actually say. But since most of Luther's day-to-day conversations were not recorded, these parts had to be made up. 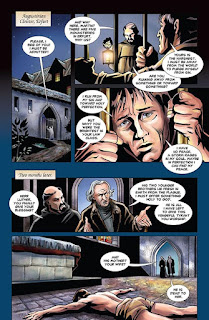 One final caution: the comic treats as fact that famous, but unconfirmed, conclusion to Martin Luther's speech at the Diet of Worms, where he is said to have declared, "Here I stand. I can do no other. God help me. Amen." There is good reason to doubt he said these words.

The comic has several strengths including the overall picture it gives of the happenings going on in the broader world that made it possible for Luther to both spark this Reformation and live into old age and die a natural death.

Another strength is that while this account is sympathetic, it notes (briefly) one of Luther's weaknesses: that sometimes Luther's pen got the best of him and he could write some "terrible and hateful words" denouncing Jews, Calvinists, and Anabaptists alike.

Overall this is a comic that teens and adults (who aren't embarrassed to be seen reading a comic) will certainly enjoy.

I've reviewed another graphic novel on Luther's life, and I think the two of them perfectly compliment each other. This Luther is the more exciting of the two, but it plays a little looser with the details. Meanwhile Luther: Echoes of the Hammer is a more reliable history lesson, but it isn't nearly as dramatic.

If you buy Luther (or anything else) at Amazon.com here or Amazon.ca here you can support this site at no cost to yourself.

Other reviews related to Martin Luther