Mother of the Reformation
by Susan K. Leigh 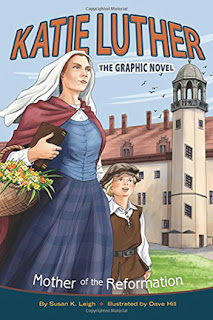 My daughter recently asked, "Why aren't there more girl heroes? Why are the heroes always boys?"

I explained that some of the heroes we read about are soldiers - generals and others – and that these are all boys because boys are bigger and stronger, so they make better soldiers.

But that conversation also set me off in search of good examples of heroic women. And one very good example is Katharina Luther.

This graphic novel biography is a sequel of sorts. In 2011 comic the same author and illustrator came out with Luther: Echoes of the Hammer. This sequel is slightly smaller, but every bit as good.

Of course, not everyone will be impressed. I showed it to a friend and flipped through the page to share highlights from Katie Luther's life and he suggested that running a household was just something that women back then did. So, hardly amazing or exceptional.

There's something to that.

On the one hand Katharina was extraordinary: as a nun she read Martin Luther's writings, even though that would have been a risky thing to do. Then, at the risk of grave punishment, she planned an escape from her convent. The first attempt was found out, and she was punished. But she tried again, and got out under cover of night, hidden away with 11 other nuns in empty barrels – she had conviction and courage!

As the comic makes clear, she was also a remarkably capable woman – Luther's household was often very large, with 30 or more students, and as many as 11 children under their care (some of whom were nieces and nephews), plus many others, eating at the table. It was quite a feat to run this all, which was more restaurant and hotel than house.

On the other hand, in many ways what Katharina did is what women have done through the ages: she was an able helpmeet, supporting her husband in his role, even as she took care of the children and managed the house. This supportive role is ordinary in the sense that many wives do this every day, but that hardly makes it unimportant. Supportive roles don't get the same recognition that leadership positions do, but they are every bit as vital.

So this is a book I'm going to share with my daughter in the hopes that Katie Luther will inspire and encourage her in whatever role - whether ordinary or extraordinary - God sets before her.

At 95 pages, this is a comic that takes some time to get through, so it is not a casual, quick read. The artwork is just as the cover depicts - solid, colorful, and full of detail. There's also a lot of information packed in here, so anyone, whether teen or older, who wants to learn about Katharina Luther will enjoy it. That's why this would also be a good resource for schools.

However, this is not a comic most students will pick up on their own. But if it were given as an assigned reading, the graphic novel format does make this pain-free reading for almost any student. It's a far easier read than any book, and more educational than many.

You can get it at Amazon.com here and Amazon.ca here.