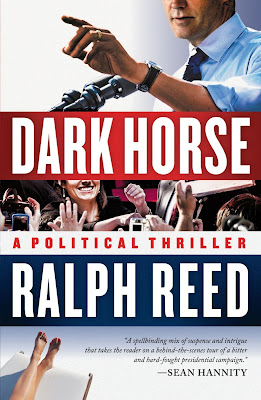 During the 1992 US presidential election the Republican incumbent was bogged down by a broken promise (“Read my lips, no new taxes”) and the Democratic candidate was bogged down by his inability to keep his pants zipped up. Into the void stepped Ross Perot, with his folksy charm, and his billions, and suddenly the unthinkable seemed not so unthinkable – could an independent candidate win the presidency?

The answer turned out to be no. Perot mysteriously suspended his campaign for several weeks and lost all momentum before he resumed, and ending up finishing third.

But where Perot failed, could someone else succeed? Ralph Reed explores the possibilities in his political thriller Dark Horse.

Governor Bob Long never wanted to run as an independent – he wanted the Democratic nomination that now belongs to his rival, the ultra-liberal Senator Stanley. But then Stanley’s campaign became bogged down over an FBI investigation, and the Republicans decided to nominate a moderate who had no time or patience for the GOP’s conservative wing. With the Republican and Democrats both competing for the liberal vote and unconcerned with courting conservatives, there’s an opportunity for just the right sort of independent candidate. Into the void steps long-time liberal, but newlyminted Christian, Bob Long. To win the Christian vote he needs to convince them he’s a changed man, but can he win the Religious Right over without losing the liberal Left?

If you already know that Dark Horse author Ralph Reed was, in his former life, the head of the Christian Coalition (once the largest Christian lobby group in America) this is probably a novel you’ll love. If you aren’t fascinated by politics, but do like reading about how someone’s love for God will impact their everyday decisions, this could also be a book for you too. But if you hate politics, hate even thinking about it, and don’t want to learn anything about it… well, then you of all people have to read this book! Politics may be nasty, complicated and even boring at times, but it’s also necessary, so we all need to know at least a bit about it. And Ralph Reed’s Dark Horse is certainly a fun way to learn the basics and beyond.


You can support this site by buying Dark Horse (or anything else) at Amazon.com through this link or at Amazon.ca here. It won't cost you anything, but sends a dime or two our way.