War in the Wasteland 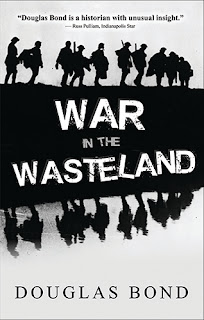 "Second Lieutenant C.S. Lewis in the trenches of WWI" – if that doesn't grab you, I don't know what will. War in the Wasteland is a novel about teenage Lewis's time on the front lines of the First World War. At this point in his life, at just 19, Lewis is an atheist, and his hellish surroundings seem to confirm for him that there is no God.

But Lewis isn't the book's main character, and for that I can't help but admire author Douglas Bond's patience. Lewis is most certainly the "star" of the story, but Private Nigel Hopkins serves the role of narrator, and for the first 50 pages of the book we learn about him, his dog Chips, and what his family thought of the war. It's only when Hopkins arrives at the front that he (and we) now get to meet Lewis in his role as one of the company's junior officers.

I'm not going to give too much else away, other than to say that when men are hunkered down in their trenches waiting through another enemy artillery barrage, there is good reason, and plenty of time, to talk about life's most important matters. Bond gives Lewis a fellow junior officer – Second Lieutenant Johnson – who won't let Lewis's atheistic thinking go unchallenged. Their dialogue is imagined - this is a fictionalized account – but Bond pulls the points and counterpoints of their back and forth argument straight out of the books Lewis wrote after he turned from atheism and became one of the best known Christian apologists on the planet.

I enjoyed this book so much that after finishing it, I found it hard to pick up another – I just knew that the next book wasn't going to be nearly as good.

I'll also add that War in the Wasteland comes to a solid and satisfying conclusion, which is a neat trick, consider that Lewis's story of conversion is, at this point, very much incomplete. But Bond ties it all together wonderfully.

I'd recommend this for older teens and adults who have an interest in history, World War I, apologetics, or C.S. Lewis. Bond has crafted something remarkable here.

You can buy War in the Wasteland at Amazon.com here or Amazon.ca here.