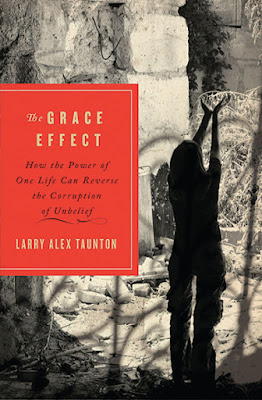 This is the story of an adoption, and also the answer to a question. As the author details, in a late-night conversation with the late Christopher Hitchens the atheist asked, in effect, "What has Christianity done for the world lately?"

He had, earlier in the evening, conceded that it was Christian thought that had led to many of the advances that set the West apart and above the rest of the world – science, human rights, humanitarian efforts, etc., all spurred by a Christian understanding of the world. But Hitchens also thought that Ancient Greeks had given us a lot...and now we had left them behind. So why shouldn't we do the same with Christianity? It is one thing to say Christianity did something for us in the past, but is that any reason to keep it now? Hitchens wanted to know how Christianity benefits the world today.

The majority of the book is an account of the overseas part of the adoption process that the Tauntons went through to bring Sasha into their family. There in the former socialist republic we see evidences all around of just what is wrought when an atheistic worldview holds sway for decades and decades. Officials and even judges have to be bribed – repeatedly – to do the duties that their salaries already pay them to do. Sasha's orphanage has no toilets, only holes in the ground, little oversight, and not nearly enough food. And yet the bureaucrats there make a show of being concerned whether the Tauntons are going to give Sasha her own room, and they forbid the Tauntons from feeding the starving girl any fast food!

Every step in the adoption process takes forever because no one can be counted on to just do their job. The primary motivator for each official they meet seems to be only their own self-interest - they just don't care about the many orphans, and speak of them as if they were somehow less than human.

In contrast the Tauntons come from the Christian West. As a society we are turning our back on God, but many vestiges of Christian influence remain. One example: while we have our bureaucrats too, bribery is the exception rather than rule. And many in our social services are motivated not by their wage but by the opportunity they have to do good. That might not be consistent with their secular faith, but a sort of Judeo-Christian ethical peer pressure persists, motivating people here to act better than they otherwise might. Doubt it? Then you have only to look at how people act where Christian influence has long since seized to be. Taunton paints a scary picture.

I will note one caution specifically for Dutch Reformed readers. "The grace effect" that Taunton speaks of in the title is the civilizing, wealth-building, human-rights-respecting impact that Christianity has wherever it flourishes. In spots he also calls this "common grace," noting that it is undeserved (thus grace) and also extends to even unbelievers (thus common, as in, common to all) in countries that have a Christian heritage.

Some Reformed Christians have a problem with the term "common grace" noting that, unless someone turns to God, this "grace" only increases the unbelievers's guilt (because even after receiving all this he's still in rebellion). And, in turn, that will increase God's wrath against persistent unbeliever. Thus they think "grace" the wrong word to use here.

But let's not get hung up on the terminology and instead focus on the point that Taunton is trying to make. He want atheists to wonder why society is so much better off when Christians, rather than atheists, are in charge. Could it be that our Maker knows what's best for us, and His commands are for our best? If that's so (and it is) then a society that obeys Him in big ways or small, will do better than a society that does not.

And that is exactly what we see happening in the world around us. Even an atheist such as Hitchens wanted to live in the more Christian West, rather than in the atheistic East.

Christopher Hitchens didn't know what to make of the Taunton family's decision to adopt a special-needs child. He didn't get what they would go to that trouble for someone they didn't know, and to whom they had no obligations. Taunton's point was simple. This is just what Christians do, because this is what Christ has done for us. When we seek to be Christ-like, then the world around us benefits too.

So what has Christianity done for the world lately? Taunton says the contrast can be see at its clearest in how the West and East treat widows, orphans, the disabled and sick, and all of society's weakest and most vulnerable. This is a very engaging, and easy read. And at just over 200 pages, it is a pretty quick one too. I'd recommend it to anyone who enjoys non-fiction, apologetics, economics, or human interest stories. I think it would interest them all!

To buy a copy of The Grace Effect at Amazon.com here and Amazon.ca here.
Posted by Jon Dykstra at 9:00 AM