Spectacular Sins - and Their Global Purpose in the Glory of Christ 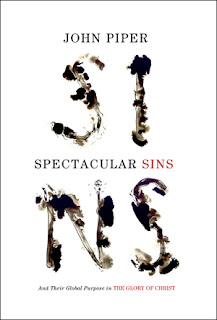 The Westminster Shorter Catechism tells us that the chief end of man "is to glorify God and to enjoy him forever," John Piper demonstrates that the glory of God (or, more specifically, of Christ) is the chief end of everything - even of evil.

Piper begins by telling us that sometimes "the bruised heart needs a tire iron" – more confrontation than comfort. In a time when the persecution of the church is beginning also in the West, His people need to hear more about God's sovereignty than His tenderness, because, as Piper puts it,  "wimpy worldviews make wimpy Christians." To do that, Piper takes us through the most spectacular sins of history - not the Holocaust, not the fall of the World Trade Towers, but the sins of God's followers against Him. The word "spectacular" in the title is no mere accident. Piper demonstrate how each of these sins is a lens through which we see Christ's greatness all the more clearly.

The first sin is the rebellion of Satan. Though the Bible never explains why and how Satan fell, Scripture does make clear that even evil supernatural powers were created through and for Christ (Colossians 1:16). Clearly, He did not make them evil, but He created beings who He knew would rebel against Him (just as we do) - so... why? Paul makes that clear to Timothy, an early example of at least a potential wimpy Christian. Paul reminds Timothy that God "saved us and called us to a holy calling... because of his own purpose and grace, which he gave us in Christ Jesus before the ages began" (see 2 Timothy 1:8-12). It was within God's plan to use the evil intentions and actions of both demons and humans to make His grace available to His people.

Piper looks further at how God uses sin for His eternal purposes in looking at the sin of Adam, the pride of Babel, the sale of Joseph, the sinful origin of the Son of David, and the most horrific and spectacular sin of all, the crucifixion of the Son of God (especially the betrayal by His own disciple). In all these sins, God shows both His eternal foreknowledge of man's evil and His sovereign power to glorify His Son as the only Savior from sin. Every situation of great sin in the Bible (and in human history in general) only makes the glory of Christ shine that much greater.

Knowing that even our sins, and the sins of those who oppress us, are no surprise to God, but serve His purpose to glorify our Savior,
You can buy a paperback copy of John Piper's Spectacular Sins at Amazon.com here and Amazon.ca here, or you can download a pdf copy for free by visiting here (see the download button on the left).
Posted by Jeff Dykstra at 3:00 AM