Journey Through the Night 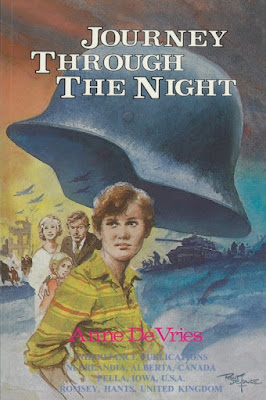 Journey Through the Night is children's fiction at its very best.

The main character, John De Boer, is a Dutch boy soon to become a man, but first he has to survive the Nazi occupation of the Netherlands. When the Germans first took over, the De Boers weren't actively trying to resist. However, as German persecution increases, John and his father are compelled by their conscience into helping Jews and others wanted by the authorities. Our "heroes" enter into their work for the Dutch underground in an almost grudging manner, but they do the work because they know it is what God wants them to do.

When I first read this series as a child I wondered why they weren’t eager to jump into the work, into the adventure! Now, as an adult I wonder whether I would have had the same courage. That is one of the strengths of the book. It tells a story about the bravery of our fathers, and grandfathers, as they fought against a government that hated God. That's something we might well have to face one day too – it won’t be the Nazis in our case, but Christian persecution around the world is increasing, and it isn't inconceivable it might happen here too. So we can draw courage reading about how God was with his people in this war, even when some were caught by the Nazis.

This story is particularly compelling for teenagers since John is sixteen. But adults will enjoy rereading it, or reading it for the first time. That's why I would recommend it for anyone 10 years old and up. As C.S. Lewis said, if a children’s book isn’t worth rereading as an adult, it isn’t much of a book at all.

Old folks like myself might remember that Journey Through the Night was originally a four-book series, translated from the Dutch original (which was a runaway bestseller). This new version includes all four books in one sturdy soft-covered edition. Kids probably aren’t going to ask for these books themselves so maybe parents and grandparents out there should consider giving this one as a gift. Who knows, maybe you’ll even be asked to read it out loud to your little descendants.

You can buy a copy at Amazon.com by clicking here. Or check out the publisher at Inheritance Publications.
Posted by Jon Dykstra at 8:00 AM