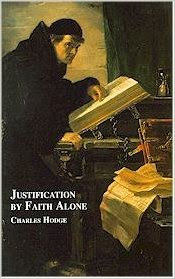 Though I originally picked this book up to catch up on my reading of theological classics (and because it was the best item available on that trip to the thrift store), this little volume, while difficult, is not a dry and dusty tome. If anything, it has only become more relevant in the last few years.

Hodge's great concern is that, as the title puts it, we believe in justification by faith alone. In making this point, he contrasts the Biblical understanding of justification with the Romanist (Roman Catholic) formulation and the Arminian view.

The first part of the book carefully shows what the basic Biblical foundation is for believing in justification by faith alone, first examining "The Meaning of Justification" in Chapter 1, Next it stresses that Christ not only gave us an example or motivation, but paid the penalty for our sins, in the second chapter, "Christ's Satisfaction of the Law." Finally, Hodge emphasizes that the death of Christ provides "The Righteousness of Christ," in Chapter 3.

The second and last part of the book is more argumentative. Hodge shows the unity of historical Protestantism on the meaning of justification by faith alone, by quoting from the Westminster Standards, the Heidelberg Catechism, the Second Helvetic Confession, and the works of Jonathan Edwards. He demonstrates that justification is not mere pardon, but is "a forensic act" (an act of God the judge accepting Christ's satisfaction of His justice). He also defines what it means that Christ's righteousness is imputed to us.

Of particular relevance to our current situation is Hodge's last chapter, in which he devotes 13 pages to the meaning of, and problems with, Arminian doctrine. Most evangelical churches hold to Arminian doctrine, and it is a temptation for every Christian to accept that his or her own faith is of some value in justification. On the other hand, Hodge stresses several times throughout the book that mature Christians cannot and will not come before God with their own works or faith as the ground for His acceptance of them, and that all the great Christian hymns always turn to the blood of Christ as their hope in the midst of their sins. In this sense, by God's grace, our hearts yearn for true doctrine, because only true doctrine truly shows God as He truly is, and bring us true peace in His presence.

If you believe that Hodge's explication of the beauty of God's work of justification from first to last will help satisfy that yearning, you can order it here.
Posted by Jeff Dykstra at 3:30 AM