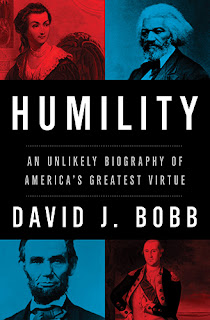 Fittingly, I found this really good read in one of the humblest of places - the bargain book shelf at Dollar Tree, (which also had a very intriguing book called Preemptive Love, about a surgeon who volunteers surgery for children affected by the war in Iraq). Both Humility and Preemptive Love come from explicitly Christian perspectives - a nice surprise for "dollar store" stock.

In the less than 200 pages of main text, Bobb offers both a wide-ranging view of the meaning of humility from the pagan and Christian perspectives and a number of specific portraits of Americans who demonstrated that virtue in the founding and refining of the American republic.

Part I: Early Life shows how the ancient Greeks, in spite of their current status as the supposed originators of democracy, did not so much believe in humility as in magnanimity. As Bobb shows from the work of Socrates, Aristotle, and Homer, magnanimity meant behaving as your superiority merited. The truly great had to seek and achieve the greatness they "deserved" - hence the prevalence of arrogant generals, kings, and emperors all lording it over their vassals and subjects. The only kind of pride the Greeks recognized as truly wrong was to seek power from or over the gods - the pride of hubris. Humility was only for those whom the fates had designated to be humble and humbled by others. It was not disgraceful, they believed, for a great man to boasts, but it was disgusting to see your social inferiors stand up for themselves or criticize the great.

Christians, on the other hand, had a much firmer basis for both humility and what Bobb calls "healthy pride" - our status before the face of God (not merely the all-too-human gods). Our creation by God gives us equality as humans, in all bearing His image, giving reason for healthy pride or human dignity. On the other hand, our status as mere creatures and as those who rebelled against God's command in Eden (pride rearing its ugly head) demands humility and self-examination. Bobb shows this in the life and teachings of Christ and subsequent reflections of Augustine and Aquinas, and demonstrates how Machiavelli and Hobbbes actually took us backward toward a love of arrogance and contempt for those weaker or (socially) "lower" than ourselves.

Part II: Trials and Temptations demonstrates the operation of both humility and dignity, from a generally Christian perspective, in the lives of five prominent or not so prominent Americans. The first three - George Washington, James Madison, and Abigail Adams - were involved in the framing of the Constitution and its Amendments, in which they consciously sought to found the new republic on a firm understanding of both human dignity ("all... created equal by God," as the Declaration of Independence) and human depravity (all subject to the temptations of self-interest and the danger of being corrupted by power). Each also struggled personally with the temptations to arrogance or assisted others in combatting such temptations. In this narrative, Abigail Adams marks a transition between the beginnings of American political philosophy and the need to reckon with its main failure - the practical issue of the unequal treatment of some. Adams recognized that the new nation did not truly treat woman and blacks as "created equal by God."

In the lives of Abraham Lincoln and Frederick Douglass, those contradictions with the American ideal wrought terrible conflict within the country - leading even to civil war - and within the men themselves. Abraham Lincoln had to negotiate the conflicting demands for justice for the slaves and unity for the nation. Furthermore he needed to see that he was not infallible and that God's purposes in history could never be certainly known and could involve using man's evil to bring about His good. Frederick Douglass had an even sharper conflict, as a slave who became a free man after his escape. As a slave, he had to learn to assert his own dignity as a man created in God's image, while not giving up his faith in God under cruel and oppressive treatment, while as a free man, he only slowly came to love his deeply flawed country and recognize that real change could only come from understanding the true meaning of the Constitution.

The brief final section, An Age of Arrogance, exhorts us to recognize that humility and dignity - recognizing who we truly are (both exalted above creation and humbled before God and by our sin) - keep America from becoming a new Roman empire, both in its pride and in its decline and fall.

An appendix entitled "A Moral Taxonomy" applies humility and its related virtues to our personal understanding.

My only quibble with this book is that, in its intellectual and political focus, it does not mention the work of  Christ or the Spirit in promoting the fruit of humility in our lives, something that becomes a little more troubling in dealing with Benjamin Franklin's quest for "moral perfection" (not a very humble goal, it would seem). As well, the religious beliefs of the Americans Bobb deals with were not necessarily orthodox Christianity. However, there is nothing in the lives of the five main Americans profiled that excludes the work of God. If, in your humble opinion, you think David Bobb has something important to contribute to your knowledge of either American history or American humility, you can purchase it here.
Posted by Jeff Dykstra at 12:30 AM