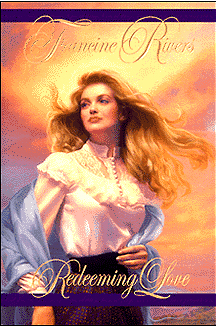 Whoever said you shouldn’t judge a book by its cover must have been thinking about Francine River’s novel Redeeming Love. When it first appeared on bookshelves it was marketed with a Harlequin Romance-esque cover – a beautiful woman looking forlorn, vulnerable, and oh-so-in-need of a strong man.

Despite the front picture, people were buying the book in bunches and the sales clerks at all three of my local Christian bookstores gushed over it. Two Reformed ministers recommended it to me. Still, I couldn’t look at the cover without rolling my eyes – I couldn't bring myself to buy it.

A year later it came out with a much more subdued cover, one that I could walk around in public without the other boys making fun of me. Finally I was able to buy it and read it.

It was worth the wait. A powerful, poignant, even brilliant novel, it tells the story of Michael Hosea, a settler in the California of 1850. The story is in many ways the retelling of the book of Hosea, and the true power of the story is in how it forces the reader back to the Bible to reexamine a small prophetic book many have overlooked. You can’t help but study the book of Hosea after reading this novel. 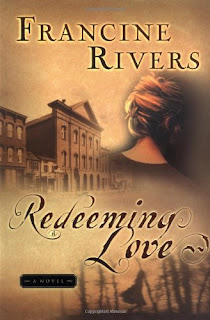 If you are well acquainted with Hosea you’ll understand why this novel comes with a “PG-13” rating. The prophet Hosea, after all, marries a prostitute, and Francine Rivers closely parallels those facts in her account. So some disturbing subject matter is dealt with that probably isn’t suitable for young teens.

Now, I'm always leery of books that purport to be fictionalized retellings of biblical stories, and with good reason. I remember one novel about the apostle Paul that left readers with the impression that him and James actually disagreed as to the importance of works, which is entirely untrue. Francine Rivers also has a number of fictionalized biographies of biblical characters and because fact is mixed with fiction it is so very hard, after reading one of those stories, to remember just what the Bible really says. So, I don't thinking fictionalized Bible tales are all that great an idea.

But because this is inspired by, rather than purporting to be, the book of Hosea, Redeeming Love is something else entirely. It would be hard to confuse this with the original source material. And yet, it is an insightful parallel of Hosea that might make this somewhat mystifying Bible book a little more understandable for some readers. And it is simply a really good read!

You can buy a copy at Amazon.com by clicking here.
Posted by Jon Dykstra at 9:00 AM