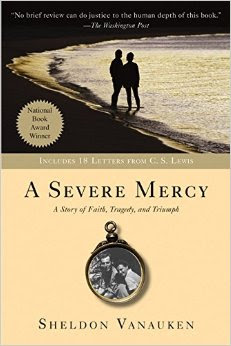 Another "really old read," but one that I've heard about a few times over the years, and finally read only recently. C. S. Lewis and his admirers do that to you. Sheldon "Van" Vanauken and his wife Jean "Davy" Vanauken not only admired C. S. Lewis, but they met him, spent time with him in his Oxford haunts, and corresponded with him - activities many a Christian English teacher would envy them for (certainly this one would!).

However, all that was after they met each other and set up what they called the "Shining Barrier" for their love. As Sheldon recounts it, they met as fellow pagans, and lived together in a blissful love (both before and after marriage) that few couples ever experience. This seems like simple arrogance, but as he explains it, their relationship had a kind of intentionality that should be characteristic of every Christian marriage. They even named the events that threatened their intense and exclusive love for each other in ways that showed that they were aware that maintaining such an intensity was a kind of warfare. For instance, they called their refusals of other possible commitments names like the "Air Force Defeat" and the "Squadron Defeat." Vanauken also uses words like "inloveness" to describe their emotion and passes on the poems he wrote during their courtship, and the two of them deliberately chose a nomadic lifestyle, boating on the Atlantic, that kept them from getting distracted by other involvements.

Nonetheless, it is not the "Shining Barrier" that makes the teaser on the top of the cover of my copy accurate: "A real-life love story, full of wonder and hope." Clearly, Christians cannot find hope in even the most ideal love story from the 1970s unless it also demonstrated God's love. God's love does manifest itself when the Vanaukens begin to meet, with considerable initial skepticism, various Christians on the campus who make Christianity both more and more intellectually credible and more and more relevant to the modern world. This already puts them somewhat in the orbit of C. S. Lewis, who spent much of his life pursuing both those objectives. Actually meeting him makes their change even easier.
.
When the Vanaukens do become Christians, they have difficulty integrating their old lifestyle with their new understanding of who God is in Christ. In that past life, they had even determined that if one were to become gravely ill, the two of them would die together, in, for instance, the deliberate sinking of their boat. Now they understand that that would be self-murder, but Sheldon still becomes jealous of his wife's increasing commitment to Christ when they move to the States.

If that were all that happened, the story might be one of gradually adapting themselves to the structures of American Christianity even while Sheldon continues to make idols both of the woman he loves and of their relationship. However, God, with the "severe mercy" of the title, acts to break the back of what Vanauken realizes in hindsight is a pagan loyalty to their love within the "Shining Barrier." The problem with that Barrier is that it shut out not only "the little foxes" that the Song of Solomon tells us can threaten a married relationship, but also God Himself, and the people whom He puts in our path to serve. It is that service to Christ in Davy's working with those learning about Christ that provokes Sheldon's jealousy.

How does Sheldon cope, then, when God, over a period of several months, brings Davy, through a mysterious illness, to that ultimate separation from her husband, death? And of more than marginal interest to an English teacher like myself, how does the presence of C. S. Lewis help him cope?

If you are intrigued by the answers to those questions (recognizing that the Christianity of Oxford that guides the Vanaukens for most of the story is certainly not the full-orbed understanding of Reformed faith, liturgy, and church structure), you can purchase A Severe Mercy here.
Posted by Jeff Dykstra at 1:00 AM