The Seven Laws of Teaching 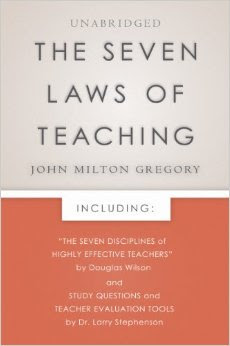 How do you teach a teacher? By going back to the basics! Even though John Gregory's book was published more than 100 years ago, his look at the basics of teaching is just as relevant today as it ever was. The chances are that it is even more relevant, given the reality of a culture that is often hostile to learning.

In the first chapter, Gregory justifies his list of seven elements present in every learning situation, each with a corresponding general rule: the teacher, the learner, the language, the lesson, the teaching process, the learning process, and the review. Each of the seven succeeding chapters discusses one of those general rules stated as a law, starting with the philosophy of the law; listing more specific rules for teachers arising out of that law; and describing mistakes and violations of the laws.

What makes this a great study aid for a teacher (like myself) even in the middle of the school year is that each chapter is followed by a set of quotations from the chapter with blanks to fill in. In the midst of a busy morning, I need no more than, say, five minutes to read another two-page spread from the book and fill in the blanks (mentally) from the quotations in the chapter up to that point. What's more, Gregory's ideas that I've worked with on a given day are immediately applicable as well as food for thought in the longer term. I will be giving at least one of my courses a major reorganization as a result of what I've read about the Law of the Learner and the Law of the Language in particular.

Of course, it's not as if I didn't know any of this already, but Gregory's systematic restatement of the basics is, as I said earlier, vital when the students that teachers work with every day seem to be actively unwilling to learn. Sometimes they are, but just as often, teachers need to know the other elements of teaching as well or better than they know their content, and Gregory reminds us of that.

A bonus in this edition is Douglas Wilson's foreword, "The Seven Disciplines of Highly Effective Teachers," which ably clarifies some of the basic attitudes that Christians should bring to their teaching... which brings me to one caution. There seems to be no doubt that Gregory wants us to be able to teach both secular and sacred truth, but at least one of his examples of great teaching (explained in the Endnotes) may strike the Christian reader as strange: for example, Thomas Huxley (also known as "Darwin's bulldog"). Gregory does not distinguish whether this particular example of the popularization of science was telling the truth or not. It is worth noting that, though Huxley was wrong, he "taught" his wrong views compellingly enough to help make them dominant even today.

If you think that this slim volume, complete with Wilson's wisdom, Gregory's grand organizing principles, and edifying endnotes, could make you or someone you know an even better teacher, you can buy this excellent edition here.

Email ThisBlogThis!Share to TwitterShare to FacebookShare to Pinterest
Labels: books you can read in an evening or two, Christian non-fiction, teacher's resource