The Book That Made Your World: How the Bible Created the Soul of Western Civilization 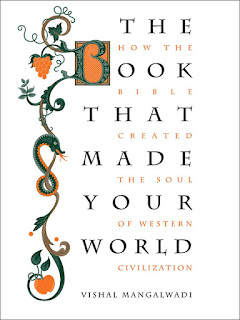 A recent review on this blog demonstrated that religious pluralism does not reflect the real world, specifically that Islam does not function as a religion of peace wherever it is in control. Vishal Mangalwadi has a similar story to tell, one that actually reflects greater respect toward other civilizations than the ideas of today's politically correct.

What Mangalwadi shows is that the Bible was crucial in promoting the progress of Western civilization, even though in many ways Indian and Chinese cultures, for instance, were much more technically advanced than European societies. He starts by showing the emptiness of present Western culture - "the West Without Its Soul." Next he traces his own journey toward an understanding of the need for a Christian foundation for culture in his native India - to curb corruption and to guide the search for basic understanding of the universe and of himself.

Mangalwadi next demonstrates how the Bible led Western culture to a basic respect for humanity that made human life worthy of protection, to a love for logic connected to the real world (unlike Greek philosophy) that made science possible, and to a compassion that drove monks to invent labour-saving technology and spare humans the tedium of back-breaking toil. He explains how the incarnation of God in Christ led to a new understanding of the hero that has enriched our communal life, and how the command to spread the gospel to foreign cultures led to the creation of hundreds of written languages that promoted many countries' emancipation from colonialism.

Biblically based worldviews have not only had massive practical effects, but continue to affect such cultural activities as literature, education, and science. Mangalwadi also sketches how the influence of the Bible has positively influenced the morality of Western culture, the strength of the American family, the commitment of Western medical care, the stewardship of wealth in Western society, and the love for liberty in Western political life.

He concludes by affirming how necessary the Bible is to bring Stone Age tribes safely into contact with the wider world and to safeguard Western culture from becoming irrelevant. An appendix shows that the Bible does not need to be a "fax from heaven" to be the trustworthy and inspired (and powerful!) word of God - powerful not only to change individuals, but whole cultures.

If you want to read this wide-ranging look at God's power to transform the whole world through His word, go to this link at Amazon.com.
Posted by Jeff Dykstra at 11:30 PM