I am an immigrant of sorts, having moved across the border to the US, and while it was easy enough to adapt it did give me a small bit of insight into what my parents and grandparents must have experienced when they moved the Netherlands to Canada decades ago. While I don't have to learn a new language, my children are going to learn an entirely different history. They say "zee," not "zed." And almost everyone I know seems to have a gun in their home.

My parents had to deal with much bigger ones, and for their parents it was stranger still. It was hard to ask for help because they didn't know the language. They needed help because things were done differently here. Fortunately, they weren't the first – others from the "old country" had come before, so there was some help to be had.

This may be an overly long introduction to a book that has no words. To cut to the chase, Shaun Tan's graphic novel may be the very best possible way to share the immigrant experience with the second and third generation. It tells the story of a father who leaves his country, his wife, and his daughter, to head overseas to find a better place for them all.

It is a very strange world that he finds. One of the first things we notice is that even the birds look different. In fact, the reader will notice that these birds don't look like any birds anyone has every seen. It only gets stranger in the pages that follow: the man encounters a mystifying immigration process, and documents that are written in a language that doesn't look like any that the reader will know. The buildings, the food, the transportation - there is a uniqueness to it all. This new country looks like no real country on earth. So what is going on here?

The first time I read this graphic novel I didn't understand what was going on and stopped reading about half way through. This time around a helpful niece alerted me to the fact that this was about the immigrant experience, so what the artist was doing, by making everything just slightly peculiar, was creating a world where the reader would feel the same sort of discomfort and confusion that a new immigrant would feel upon arrival. That little insight was a big help, and turned this from a mystifying, even frustrating story, to an absolutely brilliant one. I will admit to being a bit slow on the uptake here, as the title, The Arrival, should have given me the only clue I needed as to figuring out what the book was about. But in my defense, Shaun Tan's creation is utterly original so I have not ever read anything like it. 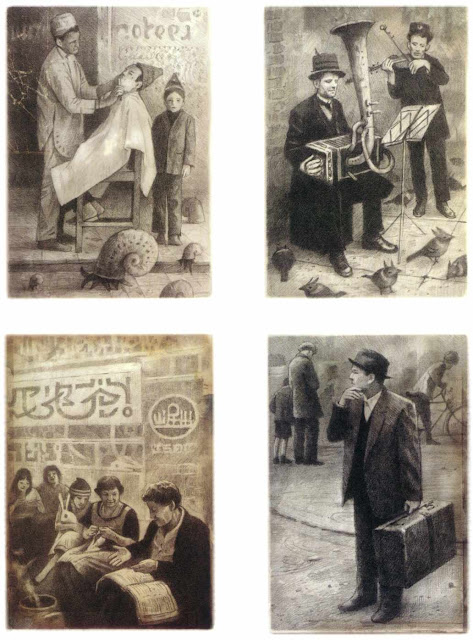 We follow the father as he sets out to find a job, finds an apartment, tries to get the coffee machine (if that's what it was) to work, and tries to figure out where to find food and what sort of food he likes. Along the way he meets several helpful people, including people who had immigrated years before, and were happy to help someone newly arrived.

So the book is, on the one hand, about the immigrant experience, and on the other is story about the impact we can have in helping strangers. The young father would have been lost but for the kindness of strangers.

This is a large book, both in the number of pages, and in the size of the pages – 128 pages and about a foot tall – with scores of details to discover on every page. So even though it is wordless, this is a good long read. I would recommend this to immigrant grandparents as a gift they could give to the grandchildren, and one they might want to "read" with them. I would also recommend it to anyone who loves art - this is a beautiful book. Finally, I would also recommend it to students who are struggling readers. This is a book with dimension and depth, even though it doesn't have words. So it requires something of the reader - it can stretch them - even as it makes things a bit easier by doing away with dialogue.

It is also quite a good value, at just $12 for the hardcover edition at Amazon.com.
Posted by Jon Dykstra at 12:30 AM