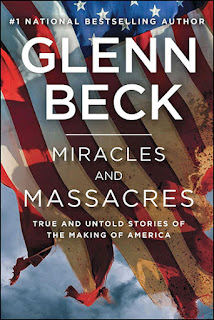 The US has two kinds of homegrown critics: those who hate the country and its foundational values, and those who love it and expect it to live up to those values.

Despite the "as far as east is from west" difference between the two groups, some lump both these groups together, labeling all critics as "haters." However, loving your country doesn't mean being blind to, or silent about, its faults.

And there is no better illustration of that than Glenn Beck's newest book Miracles and Massacres. Beck loves his country passionately, and it would be hard for anyone to hang the label "hater" on him. In Miracles Beck celebrates some of the very best moments in the country's history, as well as some of its very best men and women. And what Beck also wants to note in the sharing of the 12 historic tales in this book, is that America's best men and women can be found everywhere. For example, in the last chapter, about the apprehending of the 20th 9/11 bomber, Beck highlights the significant role that an ordinary immigration official had in finding this missing terrorist.

But what makes this a good antidote for my-country-right-or-wrong-itis is that the very patriotic Beck also include stories of America at its worst. Right alongside the story of the brave Jack Jouett, whose Paul Revere-like ride may have saved America when it was at its weakest, we read of the My Lai Massacre, where American might was put to horrific use. This infamous Vietnam War event occurred when American soldiers, expecting to find the enemy, instead found a village of unarmed Vietnamese men women and children, who the soldiers then proceeded to round up, line up, and gun down.

Even in this horrific account, Beck still highlights the good and the heroic - an American helicopter pilot intervened to save some of the villagers from his rampaging fellow soldiers.

There are ten more chapters, some highlighting the heroic, and others the horrific, both of which Beck believes we must remember. He wants us to remember the heroic so we can imitate them, and remember the horrors so we will never again commit them.

The only difficulty I had with the book is that, as a fictionalized historical account, it was hard to separate the fact from the fiction. Beck set out to make a readable account, so he wrote each chapter like a story, and that meant he had to make up dialogue and insert fictional characters to flesh out the bare-bones account captured in history textbooks. He succeeded - this reads like a great page-turning novel. But unless readers are willing to go to other sources afterwards, they will be left uncertain about any of the details. For example, in the account of the My Lai Massacre I think the helicopter pilot who intervened to save some villagers was a real person, but I'm not certain. The only thing I am certain about from Beck's account is that American soldiers massacred unarmed Vietnamese villagers.

I might also add as a caution that mature subject matter like this makes it a book suitable only for older teens and adults.

It was an exciting read, and is a must-read for anyone who is naive about the horrors that America - though arguably the greatest country in the world - is capable of.
Posted by Jon Dykstra at 12:30 AM