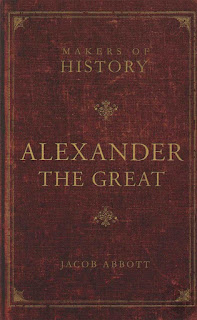 Alexander the great is one of those pivotal historic figures we should all know a little about. He lived just 33 years, but in the space of 13 he crafted an empire that extended from India to Egypt. It was short-lived, collapsing soon after his early death, but its influence lived on in the spread of his Greek culture.

The attraction of this Alexander biography over any other is that author Jacob Abbott (1803-1879) is a great writer, and provides a frank Christian assessment of the man. He readily agrees that the moniker "great" was well earned, but concludes:


He was simply a robber, but yet a robber on so vast a scale that mankind, in contemplating his career, has generally lost sight of the wickedness of his crimes in their admiration of the enormous magnitude of the scale on which they were perpetrated.

First published in 1849, Canon Press has reissued the book in an updated edition that modernizes a few words here and there to ensure Abbott's writing remains as engaging as ever. It is highly recommended for teens and adults will also enjoy this as an engaging introduction to a man they have heard of many times, but may not otherwise know much about.

Canadian readers can find the Canon Press edition at Christianbooks.com while Americans can click the Amazon link here..