Good advice from a great book 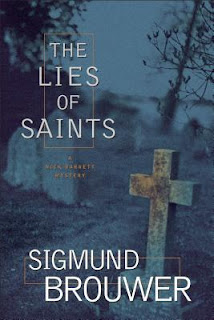 If there's one thing that makes a book for me it is good dialogue - conversations that are substantive
and feel genuine. Thus I appreciate Sigmund Brouwer.

In his The Lies of Saints the hero of our story, Nick Barrett, is helping out another private investigator. The reason he needs to help her is because Kellie Mixson is laid up and the hospital, the victim of a particularly nasty car crash. Nick is a good friend, and the perfect gentleman – he knows she has a boyfriend, so he would never think to act on his attraction.

Or so he thinks. But a pastor that knows both P.I.s – the eighty-something Samuel Thorpe – is more than a little concerned. He knows that what a man intends can change quickly, given the wrong sort of circumstances. So when Nick pops by for a visit, Pastor Thorpe decides this is the time for a needed, awkward conversation.

"It's a fine line," Samuel said, "Between ministering and tending another man's business. I'm generally averse to offering advice unasked for and, always so conscious of my own shortcomings, loath to take notice of another's. You'll bear that in mind as I speak."

"It's a ticklish business to be friends with a woman, particularly one like Miss Kellie. She's fine-looking, and smart and of good character. I'm certain you're not blind to that. I doubt for that matter, that it's escaped her notice that a woman could do worse than land a man like you. But as you mentioned, she's in a committed relationship, Nick."

"Yes, I have mentioned that before," I said. "But I don't see how this is an issue we need to discuss."

"It's not only an issue of honor," he said, "but of the slow or fast erosion of your soul. Every moral decision you make, Nick, affects your soul. This woman, I can tell, has a hold on you. Don't do anything to hurt her. Her boyfriend. Or you."

Sam straightened and began pacing again. "Now I'm not suggesting that you have or intend to do anything inappropriate. But it's like driving a car. Good drivers aren't the ones who can handle a car in a skid and keep it on the road. Good drivers are those who recognize when conditions are bad and take action not to get into trouble in the first place."

"You don't have to justify your motives to me. Just beware of them yourself. All I'm saying is if there's trouble way up the road, it'd be a lot better for you to see it coming and slow down before you reach it."

Canadians can get Lies of Saints at Amazon.ca, and Americans can find it here at Amazon.com.
Posted by Jon Dykstra at 12:30 AM