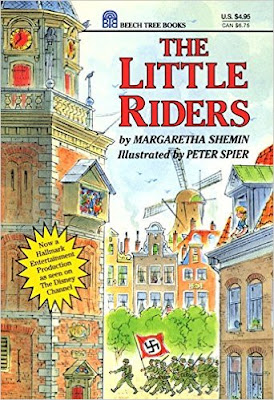 There is a treasury of great children's books about World War II that are told from the Dutch perspective. This is another, but with a difference: one of the heroes is a German soldier.

Little Johanna doesn't think much of Germans when the story begins. As her own private act of resistance she has vowed never to look a Nazi soldier in the eyes. But when her family is force to billet a German officer Johanna find the man hard to hate. Captain Braun is polite and quiet, a man who walks softly... except when he has to come into Grandmother and Grandfather's part of the house. Then he stomps noisily with his boots, "so that they could hear him long before he knocked on the door. There was always time to hide the radio behind the books in the bookcase."

Later in the story Captain Braun provides some very unexpected help to Johanna when she hides 12 ancient metal horsemen from the town's cherished church clock. The Germans want to melt them down and use the metal to make guns and bullets but the two of them tuck the horsemen away in a very clever spot.

There are clear "don't be quick to judge" and "love your enemies" lessons here, but perhaps the most important one for little ones to learn about World War II is that many of the German people should be counted among Hitler's victims.

Short chapters, and simple line drawings from Dutch artist Peter Spier, make this an accessible story for children as young as Grade 1.

You can pick it up at Amazon.com here and Amazon.ca here.

Questions for parents to discuss with their children

A couple points come up in this book that might make good fodder for discussion with our little ones.

1. Does God wants us to risk our lives to protect mere things, like these "little riders"? What Johanna and Captain Braun did could have cost them, or others, their lives if they had been discovered. Should they have done it?

2. Johanna doesn't like the Nazi soldiers, but are all of them bad? And even if they were bad, how does God want us to treat our enemies? Read Matthew 5:43-48 Is that easy to do? (See verse 48 in particular).