How do you kill 11 million people? 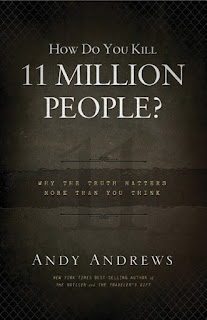 WHY THE TRUTH MATTERS MORE THAN YOU THINK
by Andy Andrews
Thomas Nelson, 2011, 80 pages

In his book How Do You Kill 11 Million People? Andy Andrews answers the title questions this way: “lie to them.”

The 11-million figure is the total of people institutionally killed by the Nazis between the years 1933 and 1945. It does not include the more than 5 million German soldiers and civilians killed in the fighting, nor the 28 million Europeans killed by Hitler’s governmental policies. What this figure does include is the 6 million Jews and 5 million others that, in general, walked to their deaths peaceably and in good order. This enormous number prompted Andrews to ask a question almost as provocative as his title: “What we need to understand is how 11 million people allow themselves to be killed?” He admits this is an oversimplification; many did resist and fought the Nazis. But most did not. Andrews asks:

So why, for month after month and year after year did millions of intelligent human beings, guarded by a relatively few Nazis soldiers, willingly load their families into tens of thousands of cattle cars to be transported by rail to one of the many death camps scattered across Europe?

The answer is that the Nazis used “an intricate web of lies” that was delivered to the Jews in stages. First they were told that the barbed wire fences going up, encircling their neighborhoods, were “temporary necessities of war” and that, as long as they cooperated, they would not be harmed.

The Germans also accepted bribes, which helped convince the Jews that they weren’t in any great danger. If the Nazis intended to kill them, so the Jews reasoned, they wouldn’t bother with accepting bribes since afterwards they could just take it all.

When the Nazis came to take the Jews to death camps they would often bring only a small number of soldiers. Adolf Eichmann, the man in charge of the Nazi genocide, would show up with “an entourage of no more than 30 local men and officers of his own – many unarmed.” He would ask the fathers and husbands to help their families onto the waiting cattle cars, explaining that the Russian advances had necessitated moving them to another place, but that it was a wonderful place. They would have work, their wives would stay at home and their children would go to school. The lack of soldiers, and the calm manner of Eichmann’s speech reassured the listening Jews who would then proceed to the train cars where they were crammed into the cars with as many as one hundred people in a car designed for just 8 cows. The door was shut and quickly padlocked. It was now too late – the cars would only be opened once they had arrived at the death camps.

That’s how you get 11 million people to walk to their own deaths. You lie to them. And the lies weren’t limited to the Jews. The German people were lied to for more than a decade before this point. In his autobiography Mein Kampf, Hitler wrote: “The great masses of the people will more easily fall victim to the big lie than the small one.” 10 million copies of his book were distributed across Germany, and, as Andrews writes, “The masses believed him anyway.”

Andrews concludes, “The most dangerous thing any nation faces is a citizenry capable of trusting a liar to lead them.”

Is he arguing that if we allow our political leaders to lie to us we’re going to be the site of the next Holocaust?

No, I’m not saying that it will happen. I am saying that it could happen…. History shows that any people who are sheeplike in following their leadership (so long as their personal self-interests are satisfied) may one day awaken to find that their nation has changed in dramatic ways.

Honesty, then, must be the bare minimum we demand from our politicians.

Are we demanding it?

Honesty doesn’t seem a lot to expect from our political leaders and yet we aren’t asking it of them.
This past month the Canadian government passed an omnibus budget bill – a massive piece of legislation that impacts more than 60 different laws. By bundling all this together the Conservatives have prevented serious debate from occurring on any of the individual sections. Back in 2005 when the Liberals presented their own omnibus budget, then opposition leader Stephen Harper objected, “How can members represent their constituents on these various areas when they are forced to vote on a block of such legislation?" It was a good point. Omnibus bills make it impossible to hold MPs accountable for any individual part because they can readily say they didn’t necessarily support that particular part, but voted for the bill as a whole. But what he opposed in 2005, Harper is now doing himself. Leader-Post writer Bruce Johnstone noted that there was one difference between the two omnibus bills: “the Liberals' budget bill in 2005 was 120 pages, a record at the time, but 'wafer thin' compared with the 452-page leviathan [of] the Tories.”

In June pro-lifers learned that six months earlier the Ontario government amended the province’s Freedom of Information and Protection of Privacy Act so that the act “does not apply to records relating to the provision of abortion services.” Ontario citizens can no longer find out how many abortions their tax dollars are paying for each year. But it isn’t just what the Ontario government did that’s offensive; it’s how they did it. The amendment was Part VIII of Bill 122: “An Act to increase the financial accountability of organizations in the broader public sector.” They hid the amendment in a completely unrelated bill, which is why it took six months to discover what they had done.

Is this honest government?

In his book Andrews asks if we’ve ever considered why we have a massive and incomprehensible tax code. It’s so complicated we either have to hire professional help to figure out how much we have to pay, or we have to spend a week or two of our nighttime hours doing it ourselves. Yet this is an issue on which we could get near unanimous support from voters: make it simpler! So why don’t we have it? Because an incomprehensible tax code is a wonderful tool for a government to hide the many different kickbacks and pay-offs they make to the groups they are really listening to.

When we think of dishonest politicians, we most often think of those that have been caught in a lie - Richard Nixon and Bill Clinton may come to mind. But there is another sort of dishonesty that is more prevalent. Our elected politicians are supposed to be accountable to us, so whenever they try to evade that accountability they are not being honest with us. The omnibus bill, Ontario’s secret amendment, even the political candidate who tries to get through a campaign without making promises at all – these are the actions of politicians who don’t want to be held accountable.

There have been many “bare minimums” proposed for what we absolutely must demand from our politicians. In the US right now some Christians are arguing that we can only vote for a candidate who professes God’s name (and that, therefore, Christians should not vote for the Republican candidate Mitt Romney who is a Mormon). Another bare minimum, frequently proposed on both sides of the border, is support for a balanced budget. In our Reformed circles many argue (myself included) that we must not vote for a candidate who won’t stand up for the unborn.

But Andrews’ minimum is more vital than any other. After all, it doesn’t matter what a politician says he stands for or what promises he makes if he isn’t honest.

If we are going to demand honesty, what does that involve? It means researching each candidate’s positions, and going to them to get answers if they haven’t addressed an important issue. And if they won’t answer, they are telling us they don’t want to be held accountable on that issue. It means checking on the incumbent’s record to see if he has kept his promises. It means encouraging our elected representatives to ask for accountability, and congratulating them when they do. And finally, it means not voting for candidates who aren’t being upfront… even if that leaves us with no candidate to vote for.

The vital necessity of honesty is a point we can communicate even to co-workers, friends and neighbors who may not share our political convictions. They might oppose us on abortion, budgetary priorities and foreign policy, and we could still get them to come alongside us demanding accountable, honest politicians in all parties. Andy Andrews’ book could be an effective tool towards that end. It has an attention-getting title, can be read in 45 minutes to an hour, is an affordable $15, and its sturdy hardcover will stand up to repeated readings, making it the perfect lending book. Let Andrews convince your neighbors that next election we need to demand more from our politicians – we need to demand honesty.

You can pick up a copy at Amazon.com here and Amazon.ca here.
Posted by Jon Dykstra at 2:10 PM

Email ThisBlogThis!Share to TwitterShare to FacebookShare to Pinterest
Labels: books you can read in an evening or two, political, World War II