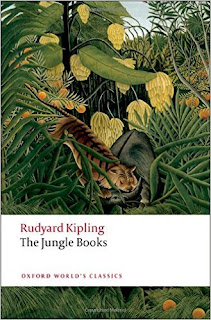 About half the stories tell how Mowgli, a boy raised by wolves, moves from the jungle to the world of men - and back again, for a time, when the foolish villagers fall prey to superstition about Mowgli.

Kipling's tales are far better than any of the movies based on them. The movies either remove the 'personality' of Mowgli's animal companions, or destroy their created dignity by making them far too human. In the original Mowgli tales, the animals have conflicts and personalities, but even as their interaction with Mowgli firmly nudges him down the path toward maturity, his animal mentors - and enemies - never lose the strangeness that makes them so wondrously different from us humans.

What is so compelling from a Christian point of view about the Jungle Books is that human beings, foolish and dishonorable as they often are, still have dominion over the animal kingdom - just as in Kipling's Just So Stories. The stories always uphold the message of Genesis 1 and Psalm 8 – that man is ruler over creation. As vulnerable as Mowgli the child is in the jungle, the animals cannot look him in the eye.

Parents may want to skip some of the ‘non-Mowgli’ stories, but at least one, “Rikki-Tikki-Tavi,” has several picture-book versions, and reinforces the same themes as the Mowgli stories, in telling of a mongoose who learns to protect "his" (human) family from poisonous snakes.

Finally, for read-aloud, it is almost impossible to find a better set of books than these two for two great reasons. First, the stories are populated by dozens of fully-realized animal (and some compelling human) characters - each with his or her own manner of speech, giving the reader the fun of recreating their unique voices in their wise and witty dialogue. Second, every story begins and ends with its own songs - amazing poems as musical and memorable as Kipling's classic "If" - and the language in the story is just as poetic.

With encouraging lessons about man's place in this world, an emotional look at the challenge of growing up as an outsider with the help of insightful friends, and enthralling language, the two Jungle Books will be as enjoyable for adults to read aloud as they are for children to listen to.

You can pick up a copy at Amazon.com here and Amazon.ca here.
Posted by Jeff Dykstra at 12:01 AM