Letters That Got Away 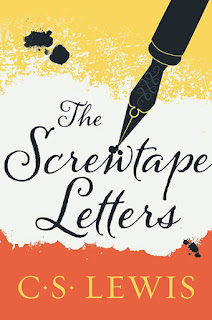 Normally, we don’t appreciate people going through our personal correspondence. However, from the 1600s on, people have been fascinated by other people’s letters, whether real or fictional. In Screwtape Letters, C. S. Lewis used the device of the correspondence between two devils to make his own points about the kind of temptations faced by human beings, temptations that may well have been orchestrated by hell itself. (See the description of the tongue in James 3!) More recently, Randy Alcorn, who admits his debt to Lewis, has created his own more involved version of the same story, titled Lord Foulgrin’s Letters.

If you are considering reading either of these books, you may have two questions ringing alarm bells in your head. One is essentially negative: Does anyone have any business looking that deeply into the nature of evil, especially demonic evil? The other is skeptical, but basically positive: What can a look at the topsy-turvy perspective of the evil one tell us about the way life should be?

So, first, is it dangerous to look at evil too closely? The apostle Paul certainly implies that we should not focus on evil, but on good, when he commands us to “think about... things” that are “noble, ...right, ...pure, ...lovely, ...admirable, ...anything... excellent or praiseworthy” (Philippians 4:8, NIV). Paul also tells the Ephesians that “it is shameful even to mention what the disobedient do in secret” (Ephesians 5:12).

One might well ask why C. S. Lewis and Randy Alcorn did not write more about angels instead of focusing on demons. Lewis himself felt that it was impossible for him to write authentically about angels, since he, as a sinful man, could not well portray the absolute submission of angels to God’s will, while (sadly) we all know far too well what devilish thoughts and desires must be like, since by nature we are also in rebellion against God. Alcorn, on the other hand, does include a letter from one of God’s angels in his book, but you’ll have to read the book to find out whether or not this "works." 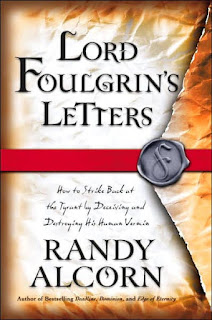 Lewis’s words do give us an idea of why looking at devils might be useful for a Christian. To realize that temptation often has a demonic source may help us take our own sin and misery more seriously, something the Heidelberg Catechism points out is all-important knowledge (Lord’s Day 2). And while it may be shameful to self-righteously focus on others’ sins (see Matthew 7:1-5), we must be aware of our own sinful weaknesses, lest we fall prey to them. Lewis and Alcorn’s books echo the great truth of Ephesians 6:12, that we are in the midst of a “struggle... against the spiritual forces of evil in the heavenly realms.”

The Screwtape Letters and Lord Foulgrin’s Letters may even be seen as obeying the command of Philippians 4:8 when we realize that Lewis’s and Alcorn’s devils cannot help speaking about “whatever is noble, ...right ...pure, ...lovely, ...admirable, ... excellent or praiseworthy.” Of course, they speak in enmity rather than awe, but as long as we accept whatever they reject, we can learn much from their malicious advice.

Alcorn’s book is particularly interesting, because it carries Lewis’s premise just a little further. Whereas Lewis sticks to letters written by a senior devil to his protege during World War II, Alcorn alternates letters with chapters of narrative about the family targeted by Foulgrin, and sets the story in our own time, with references to e-mail and teenage despair. Even more importantly, while Lewis’s account takes us up to the moment of conversion of a non-Christian, Alcorn deals with the demons’ reaction to the conversion of the central human character, especially their attempt to make him an ineffective Christian.

What this means is that Alcorn deals with two issues that Reformed Christians also struggle with now: how to react to the “world,” and how to respond to God in our spiritual life. For instance, at the same time as Foulgrin extols the danger of pornography on the web, of broken families, of consumerism and materialism, he also rages against the “sludgebags” whom God gives physical bodies. Through Foulgrin’s words and the narrative chapters, we see both the temptations of worldly pleasures and the true beauty of the pleasures God gives us in this physical life: the taste of a fine meal, the touch of a loving husband in a foot massage for his pregnant wife, the sight of a sunset, and the smell of freshly baked chocolate chip cookies. Alcorn thus attacks both the attitude of Christians who mistrust enjoyment in life and the foolishness of those who think that we can experience the world on the world’s terms, and not be influenced by that world. Foulgrin gleefully mocks the stupidity of Christians who know that viewing someone else’s nudity and sexual intimacy is wrong, but do not flinch from seeing the same in a movie. He is, of course, immensely pleased also by parents who keep poisonous household products on the top shelf to protect their children, but who pay no attention to the toxic ideas their children ingest through the Internet and the music they listen to.

CAUTION and CONCLUSION: Are there still problems with reading about life from a demonic perspective? Any concerns with this way of writing about the spiritual and moral life of a Christian may be allayed by the fact that both Lewis and Alcorn show their demonic title characters losing in the ultimate sense. The only other problem that Reformed Christians might have with both these books is that they seem to imply that conversion is a matter of man’s free will - the error of Arminianism. Whether this Arminian tendency is simply the devils’ mistaken understanding is not clear, but Lewis at least seemed to be Arminian in his other writing (even while demonstrating that his own conversion was a result of God’s persistence rather than his search!). Despite this quibble, I would recommend both these books to any Christian who is open to considering just how effective and consistent his or her own Christian walk is, and in what areas he or she needs to plead for God’s Spirit to work “against the spiritual forces of evil in the heavenly realms.”

You can support this site by using either of these Amazon.com links to buy Lord Foulgrin's Letters or The Screwtape Letters