The Betrayal: a novel on John Calvin 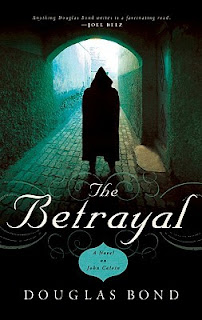 If you want to get an understanding of the times Calvin lived in, this novel is better than any biography. Douglas Bond immerses readers in the day-to-day details of living in France in the 1500s by telling Calvin’s story through the eyes of a life-long, entirely fictional, companion named Jean-Louis.

Jean-Louis is born in the same village as Calvin, and for a time goes to the same school. But while Calvin’s intellectual gifts set him apart early, Jean-Louis is an average fellow living an ordinary, though rather brutal existence. Like many in the 16th century, he loses his whole family and his livelihood to the Plague. Left without a home or money, he falls back on his one extraordinary ability: Jean-Louis can lie without shame or qualm of conscience. It is this “talent” that gets him close to Calvin again, securing a job serving the Reformer. And it is this trait that allows him to act the role of loyal servant even as he vows to work against God’s servant.

This is a fascinating read, but it does takes some effort. Though Bond is known as a teen fiction author, the weighty theological dialogues interspersed throughout The Betrayal make this a novel best suited for adult Calvin enthusiasts – for them it would be a really great read. I think I've read a half dozen biographies about John Calvin, but this fictionalized account might have given me the best feel for his life.

P.S. if you know any one whose first language is Dutch, it has been translated, and is available as Het verraad.

You can pick up a copy at Amazon.com by clicking here.
Posted by Jon Dykstra at 6:00 AM