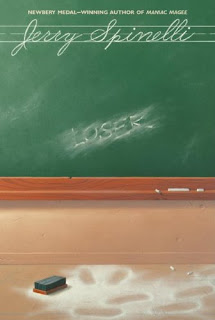 Donald Zinkoff's name is not the only thing that makes him conspicuous. All the things that make him conspicuous brand him either as a "loser" or simply as someone who wears his heart on his sleeve.

In Jerry Spinelli's novel Crash, the bully who narrated the story showed us how unsatisfying it is to treat others as losers. In Loser, we see the story from the point of view of the one living with the various handicaps that lead him to be labelled and shunned by others.

Spinelli does not romanticize Zinkoff's life. Zinkoff never learns to write legibly. He is uncoordinated in sports. Finally, for the first eight years of his life, he has a stomach disorder that leaves him subject to sudden vomiting. He can react quickly enough to vomit in something, but not necessarily quickly enough to find the right container. Even his loving father's patience is sorely tested by this particular weakness.

And patience is part of the point. For Zinkoff's greatest weakness - and his greatest strength - is his inability to see himself and his life through others' eyes. He doesn't reflect on life; he simply lives it - to the fullest. When he is having fun, he yells "Yahoo!" He laughs uncontrollably for an hour when he hears a word that sounds funny to him.

As unreflective as Zinkoff is, others do eventually make him uncomfortably aware that he does not measure up to their standards. One teacher assumes that he must be deliberately trying to annoy her, dislikes him for his illegible handwriting. Another gives a personality test that makes him aware that he has no best friend. His classmates reject him because of his poor performance at Field Day.

Zinkoff finds ways to cope with these setbacks, partly by immersing himself in the lives of other equally outcast characters in his neighbourhood. In the end, his love for his neighbour, like that of the rejected Samaritan in Jesus' parable, leads him to try to help find a little lost girl, but also puts his own life in danger on a dark, cold, blizzardy winter night.

CAUTION AND CONCLUSION: Spinelli's novel Stargirl uses evolution as an explanation for our unity with nature. None of his novels feature clearly Christian solutions to the conflicts involved, but several show sympathy for the role of religion in the lives of the major characters. Loser's main character goes to church, but faith in God does not really enter into his daily response to the world. However, the whole story serves as an example of the importance of loving even those who are not "cool." How much more should we as Christians seeks to love all the members, strong and weak, of the Body of Christ. Recommended to get discussion started - especially as a read-aloud by parents and/or teachers.
Posted by Jeff Dykstra at 7:11 PM