Michael Vey: The Prisoner in Cell 25 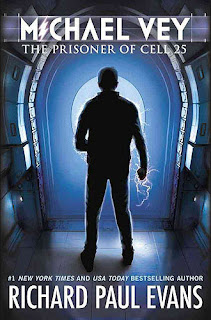 I got this to find out why Glenn Beck was so excited about it. Beck doesn't generally jump up and down about teen science fiction, but he was so impressed with Michael Vey: the Prisoner in Cell 25 that he helped publish it and plugged it on his show for weeks. After finishing it, I'd agree with his hype - you'd definitely be happy if your kids read it.

That said, I did have to read more than half the book before I came across what made it special. At first look Michael Vey seems a solid, but not so notable teen title. It is well-written and gets off to an intriguing start, but the protagonist is hardly unique - Michael Vey is an unpopular, bullied student, who seems unremarkable, but who is actually and secretly remarkable indeed. Does that sound familiar? It sure does. But in this case, instead of being a wizard, or the son of a Greek god, or the love interest of a werewolf or vampire, the boy in this story is special because he is electric. Michael Vey can "pulse" and essentially Taser anyone who might be bothering him. But people are searching for him and his mom, so instead of showing the school bullies who's boss, he lets them push him around - he has to keep his powers secret to keep him and his mom safe.

Michael thinks he's unique until he discovers that the most popular girl in school, a cheerleader named Taylor, also has special powers. When they start researching how they might have gained their powers, the people searching for Michael discover him and kidnap Taylor and his mom.

Now the entire book is a fun and frantic ride but it's here that the book becomes remarkable. SPOILER ALERT - what I am about to reveal happens about two thirds of the way through the book, and does spoil some of the tension, so if you are thinking of reading this book yourself, skip over the rest of this paragraph. However if you are reading this review to find good material for your kids, read on. The kidnappers present Michael with the choice of either electrocuting one of the boys who used to bully him, or watching as they electrocute his mom. What choice does he have? Who will die: his mom or the bully? In many other teen titles the obvious choice would be to kill the bully. In this one the choice is just as obvious, but is instead not to kill the bully, because, as Vey tells the kidnappers, "My mother would... rather die than see her son become a murderer!" Given an impossible choice, our hero picks the harder one and only moral one (Vey realizes we are not allowed to murder, even when our loved ones are being threatened).

It's our hero's character that makes the book remarkable - he'll do the right thing, even when it could come at a horrible cost. That separates Michael Vey from most other "heroes" in today's teen fiction and makes this book a great gift for your teenage children. And it could make for a great dad/son discussion afterwards about how making the right choice can come at a cost, but that it remains the right choice nonetheless.

You can get a copy at Amazon.com by clicking here.