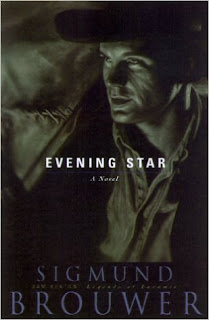 I picked this one up because I've read and really enjoyed two novels the author co-wrote with Hank Hanegraaff:

In Evening Star Sigmund Brouwer again switches genres, taking on the Western. Or that's the setting - the American frontier in 1874 - but it could as easily be called a mystery as Sam Keaton, from the moment he steps into the town of Laramie, has to solve one mystery after another. It all starts with the mysterious Indian that Keaton saves from a vicious beating. This good deed puts Keaton behind bars, and when this Indian next shows up, he's got a message from a mysterious woman named Rebecca, who promises to help Keaton escape. But before she can engineer his rescue, the town's Marshal, a mysterious sort himself, decides to help Keaton escape first and sends him off to find out about some gold that may, or may not exist.

So the mysteries abound in this very fast paced book but what brings some depth to it, and sets it apart, is the growth Keaton goes through. Early on, he's trapped in his tiny jail cell facing a very large, very angry man who has been sent to kill him. Staring down the wrong end of a shotgun barrel changes Keaton. When a pretty, and very willing young woman throws herself at him, Keaton turns her down, but finds himself


"... wondering why I had not pursued the company she had been offering.... Because of that shotgun I could not deny the nagging feeling that I was missing something, that life had to be bigger than finding ways to satisfy the varied demands of my body. I could not escape the feeling that deep down, I'd always known life had to be bigger, but along the way I had always chosen whatever distractions it took to keep me from wondering about God. Except now, try as I might, I couldn't ignore what some certainty told me was beyond. If I turned my back on whatever instinct now pulled me to seek answers, if I chose distractions like this Suzanne, I would have to fool myself real good not to find those distractions sour and hollow."

Keaton isn't done with his spiritual wrestling by the end of the book, but he has made a good start of it.

But while there is a lot to love about this book, it is worth noting that there is some adult material here - there is some grit. One example: Keaton recalls a time when he was seduced by a "wild" woman. It never gets lascivious but Brouwer does describe sexual temptation in a pretty frank way. So this is a book I would recommend for adults only.
Posted by Jon Dykstra at 1:10 PM