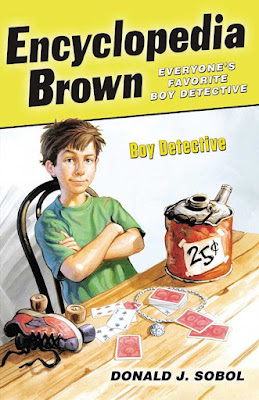 Idaville is a small town with a very impressive record - no one, absolutely no one, gets away with breaking the law. Most of the credit goes to Police Chief Brown, but if people would believe it, he would let them know that the town's most puzzling crimes are solved at the Brown's dinner table by his ten-year-old son Leroy! His son, known as Encyclopedia by his friends, also runs his very own detective agency, charging 25 cents a case, plus expenses.

The Encyclopedia Brown series are great books that each include 10 mysteries for readers to solve right-along-side our pint-sized detective. In this, the very first one, all the information needed to solve the mystery is included in the story, and the solution is found in the back. And though the mysteries are simple enough that boys and girls in the 9-14 range will be able to solve many of them, they are still subtle enough to present a challenge to adults (I have to admit I had to peek at the back to figure out 2 of the 10).

As you might guess from Encyclopedia's pay rate, this is an old book. It was first published back in 1963, so even though many more books have followed, with the 29th and last published in 2012 (a year after the author’s death) the whole series has an old-fashioned feel and appeal to it. For example, Encyclopedia often has run-ins with the Tiger gang, but this is very much a 1960s sort of boys' gang - they run minor scams, try to trick kids out of their allowance, and might even start a tussle or two, but the very worst that would result is a black eye, or fat lip.

I read these as a kid and loved the mini-challenge of each mystery. I was happy to see the series was still in print, and that new ones were being written, but I did notice when I checked out one of the latest ones, Encyclopedia Brown and the Case of the Secret UFOs, that two of the ten mysteries required the reader to know a little something that wasn't included in the story (for example, "The case of the giant shark tooth" could only be solved if a reader knew that sharks constantly replace their teeth). So the earlier titles are just a bit better than the most recent - no outside knowledge needed.

All the main characters, but one, are boys, so these are basically boy books, but they are great for anyone, boy or girl, who likes wrestling with problems. And dad might enjoy it too.
Posted by Jon Dykstra at 6:00 AM