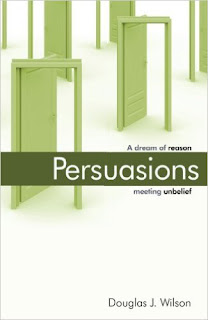 A dream of reason meeting disbelief

In Pilgrim’s Progress, we follow the pilgrim Christian and see the people and problems he meets on his journey. The very first person is Evangelist, who tells him about a Celestial City, and sets him off on the path to it. Now in Douglas Wilson’s Persuasions, instead of following Christian, we stay with Evangelist, and listen in as he converses with the many other travelers who are on this road.

The people he meets are all heading in the wrong direction, away from the City and towards the Abyss, so Evangelist tries to make them aware of the peril by exposing to them the inconsistency of their beliefs.

These people each represents a worldview and the first one Evangelist meets is Randy, a young man who has made a god out of sexual immorality. When Randy finds out Evangelist is a Christian, he mocks monogamy: “Making love to one woman for life… That’s like buying one record and taking it home and playing it over and over and over again.” But Evangelist is quick to corrects him: “I’m afraid your analogy is a faulty one. It is not like buying one record; it is like buying one instrument and learning how to play it. If you are committed, boredom is not a danger.”

Evangelist doesn’t instantly convert Randy, but he does get him thinking. And in the encounters that follow he does the same for many others, including:

- an evolutionist
- a feminist
- an agnostic
- a liberal "Christian" scholar
- an Antinomian
- an atheist
- a woman who is dismissive, because of the hypocrisy in the Church
- a pantheist
- a Roman Catholic
- and a man troubled by the doctrine of Election.

There are 13 encounters in all, each of which is entertaining, and highly educational. I would recommend this book to any adult or older teen, but it would make a particularly good gift for anyone making their profession of faith.

I should also note one instance of a character using God's name in vain. It happens only once, but I find it curious that in Christians books it is not all that rare to find characters taking God's name in vain, and yet you will never find them using the F-word. The reason for that is clear - were they to use the F-word, Christian readers would protest, and write the author asking why he would use such language in his book. And yet when God's name is used in vain, we Christians are silent.

I sent a query about this to the book's publisher (I couldn't figure out how to contact the author himself) and was sent back this link to a video of Pastor Wilson speaking about "cussing characters" - how Christian authors should deal with obscenity, swearing and vulgarity. I wanted to pass on the link, because I think it is a very helpful outlook on this general topic, even though it left me wondering how the pastor would respond if I could have asked him about the specific instance occurring in this book (I suspect he might today acknowledge it as a mistake).

To conclude, a remarkable book with this one mar.
Posted by Jon Dykstra at 6:00 AM

Email ThisBlogThis!Share to TwitterShare to FacebookShare to Pinterest
Labels: allegory, books you can read in an evening or two, Christian fiction, college, philosophy, Pilgrim's Progress, Wilson