The Murder of Abraham Lincoln 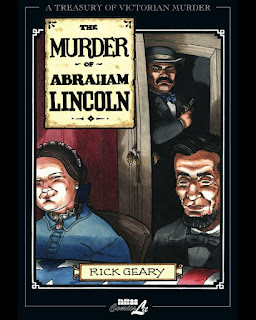 Author and illustrator Rick Geary has created a series of graphic novels about Victorian-era murders. While I don't think I'd be much interested in reading others in the series (I don't feel a need or a desire to learn about Lizzie Borden or Jack the Ripper) The Murder of Abraham Lincoln is a title I would recommend to anyone interested in American history.

It starts with Lincoln presenting his second inaugural address. Geary gives a brief accounting of the end of the Civil War, and intersperses it with parts of Lincoln's speech - it is a great opening to a great book. We are then told a little of assassin John Wilkes Booth's background, and his motivations, and are introduced to the co-conspirators. The last third of the book takes place after Lincoln is killed, and shows us the man-hunt for Booth, as well as the country's reaction to the assassination.

A graphic novel is a compelling way to tell this story, first because Geary uses this format to shows us the layout of Ford's theatre (where the assassination took place), escape routes, and other maps, and second because pictures, properly used, can tell, if not a thousand words, at least a couple hundred or so. This volume is only 80 pages, but there is a lot of information packed into it - it gives readers a great feel for the time, and insight into the still brewing conflict that had almost split the country asunder.

The only concern I have with this volume is that it casts some suspicion on Secretary of War Edward M. Stanton. The author doesn't directly accuse Stanton of having a hand in the assassination, but he does raise questions about him: "Was he guilty merely of overzealousness in the execution of this office - or do his actions indicate an intent more nefarious?" I'm only passingly familiar with other accounts of Lincoln's life and death, but have never heard these questions before, so I wonder how legitimate they might be. But Stanton is a relatively minor character in this story, so this is only a minor concern.

I would recommend this book for anyone 12 and over (the illustrations have been done with restraint - there is no gore to speak of) and I'm sure adults will enjoy it, and find it educational as well.

You can support this site by making your purchases through our links (then Amazon sends us a dime or two at no cost to you). You can pick it up The murder of Abraham Lincoln at Amazon.com here and Amazon.ca here.
Posted by Jon Dykstra at 6:00 AM