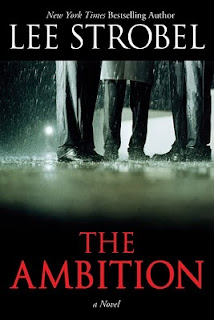 I came to this book with some skepticism: the author is a well known pastor and author, but up until this point he has never written fiction. And on top of that, there's some reason to be skeptical of whole genre of Christian fiction - many Christian authors think good intentions, or a good message, are an adequate substitute for good writing.

But Strobel pulls it off. The actual writing is only ordinary (there's room for improvement, but it never gets in the way of the story) but the plot is solid, layered, and satisfying. It helps that Strobel, a former journalist, and the pastor of a very large church, is writing about what he knows: one of the main characters is a journalist, and two more are megachurch pastors.

It's hard to summarize the plot because it's hard to nail down which of the cast is the main character. Is this the story of Tom O'Sullivan, a lawyer and gambling-addict who owes some big money to some scary sorts? Or is this the story of pastor Eric Snow, who is considering a run at the US Senate? Or might it be about Garry Strider, a cynical reporter who has no time for God, but does have time to investigate one of His churches? I've never read a book where it was less clear who the protagonist was, and while that might have some critics saying the book lacks focus, I actually found it an intriguing change. In other books, where the protagonist is clear, you know who definitely isn't going to die. In this one, because it all seems up in the air, the reader is left guessing who will, and who might not make it to the final page.

So let's give another go at a plot summary. The Ambition referenced in the title is for the US Senate seat that suddenly becomes available when a scandal forces the current senator to resign. The governor is going to appoint the replacement, and he has narrowed it down to two men: Eric Snow, megachurch pastor, and former highly successful Internet entrepreneur; and Judge Reese McKelvie, long time friend of the governor, and the man credited with cleaning up corruption in the state's court system. Both want the job, but what will they do to get it?

I don't want to give too much away, so I'll finish by highlighting some points I loved about the book. First, while not all the characters are fleshed out, there isn't a cliched stock character among them. These all seem like real people, wrestling with real problems. God can help them, but the God described in this book is not like the fairytale godmother who inhabits many other Christian novels, granting everyone's wishes. God is powerful, and good, but He doesn't always act as the characters want Him to, or in ways that they understand. Only about half the cast is Christian, and while there are no real conversion scenes for the half that isn't, the whole cast is forced to wrestle with what really matters in life. The book goes deep, and does so without getting preachy. And it starts off with a bang - a hit takes place in the very first chapter - and it continues on at this crisp pace.

Reformed readers will quickly realize that the author, Lee Strobel must be Arminian - there is a definite, though hardly potent, Arminian flavoring to the book.  One other area that might cause some concern to Reformed readers is the presentation of two miraculous healings. Some Christian authors (Peretti, Dekker, etc) treat miracles as common place, but the characters in The Ambition treat both occurrences as skeptically as most of us would - there are a lot of charlatans in the world. However they also know better than to dismiss the possibility that God did choose to heal instantly. The miracles are presented as genuine but rare, which is indeed how we see God operating today.

A final caution: near the end of the novel one character takes God's name in vain. I find this a particularly inexplicable thing for Christian writers to do, since you will never find one making use of the f-word. So it is not a matter of realism – if it were, then f-bombs should pepper their work, as they do everyday life (though I don't think realism is a sufficient justification in most situations). But the fact is Christians authors have more reverence for this four-letter obscenity than they do for God's name. It only occurs once, so far as I noticed.

That notable flaw aside, an engaging novel I would recommend to teens and adults, and probably more so to men than women as all the main characters are men. A very fun, quick read.

You can buy it Amazon.com by clicking here.
Posted by Jon Dykstra at 12:03 PM