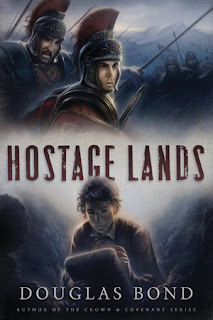 “When am I ever going to use this?” It’s a question that comes up frequently in classrooms around the world. And it’s a question Neil Perkins, a British lad, is asking about his Latin class. But while some students have to wait years to put the lessons they learn to practical use, Neil only has to wait until later that same day.

On his way home from school he takes a nasty spill off of his ATV, creating a small crater where the machine lands. It’s in this crater that he discovers the leather -wrapped  tablets that are the focus of the majority of this book. These tablets are covered in Latin, so Neil, with the help of his underappreciated Latin teacher , starts translating them. He soon finds out they comprise a story told by a Roman centurion who lived two thousand years ago!

Douglas Bond’s Hostage Lands is really two stories in one. The first is a short story about a boy named Neil who doesn’t like Latin, and doesn’t talk much with his dad. This accounts for only 6 of the book’s 37 chapters, serving mostly as an introduction and conclusion to the larger story about Roman Centurion Marcus Aurelius Rusticus. The Centurion’s story starts with his account of what he suspects will be a suicide mission into the lands north of Hadrian’s Wall, the territory of the savage Celts. Rusticus only manages to escape death with the help of a friendly Celt, Calum, who he soon discovers is a very different sort of man, for Calum is a Christian.

I don’t want to give too much away about this book but would like to strongly recommend it. This is Douglas Bond’s very best book so far. Christian fiction is too often celebrated for the great message contained in the book, even when the artistry, the actually writing is poor. Bond’s book has a strong message – in it the Christian worldview is contrasted with worldviews that elevate power, the State or maybe honor to be supreme. However it is also a wonderfully written, thoroughly engaging story.

I would think this is primarily a boy’s book, in the ten to early teens range, though a father may want to pick this one as a read aloud book because he’ll probably enjoy it too.

You can get a copy at Amazon.com by clicking here.
Posted by Jon Dykstra at 6:00 AM